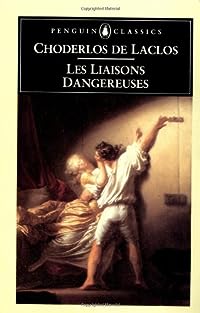 Again I have to thank The Classics Circuit for introducing me to this book and French Literature in general. I would never have chosen this book to read had it not been for the CC and its participants.

The fact that this is an epistolary book was a bit off-putting to me but I didn’t have any problems with it at all. I was lucky enough to have the time to read the book in four days so it may have been more confusing if I had been picking it up and putting it down for weeks on end.

It was first published in Paris in 1782 and was regarded as outrageous, consequently it sold out within a few days.

It’s the story of two French aristocrats, the Marquise de Merteuil and the Vicomte de Valmont, who use and manipulate the lives of their supposed friends, young and old. In the course of entertaining themselves in this way they cause mayhem in the lives of all concerned.

The main female character, the Marquise de Merteuil is portrayed as being the most dangerous of the pair, positively poisonous. Plus ҫa change – as they say!

Anyway, I enjoyed it and I’m hoping to be able to see the film soon, which has Colin Firth playing the part of Valmont. I’m wondering how I’ve managed to miss seeing it!