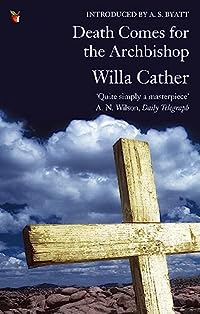 I’ve really enjoyed all of the books by Willa Cather which I’ve already read so I’m going to work my way through the rest of them.

I was quite disappointed that she wrote a book about the Roman Catholic church because as I was brought up in the west of Scotland I’ve found that avoiding religion is the best policy. Anyway, I ‘girded my loins’ and remembering that I had enjoyed Rumer Godden’s In This House of Brede, I took a big breath and plunged into it.

As ever it’s Cather’s descriptions that I love, she gives her novels a wonderful sense of place and makes it really easy for you to live there in your imagination, even if the landscape which is written about is an entirely alien one to you.

Looking at the story from a non Catholic viewpoint: This is about Roman Catholicism taking over from the original religion and traditions of the people of New Mexico. Two priests Father Vaillant and Bishop Latour are given the task of making the RC church more powerful. They are welcomed by the natives who are generous to a fault and the two priests sponge off them, taking everything that is offered to them – and more. The one mountain in the area which is a beautiful cream coloured rock is plundered and quarried to build a huge stone cathedral in a sparsely populated area. It’s Bishop Latour’s vanity project.

From the Roman Catholic point of view: This is the story of the church spreading its influence into New Mexico and helping the inhabitants have a better way of life through Catholic worship.

Having been brought up a Presbyterian and married to an Episcopalian (which Willa Cather converted to), I decided that atheism was the one for me and the only ‘religion’ that interests me is Celtic mythology because I like the importance that it places on nature and plants. But the Christians nicked all of the Celtic/Pagan festivals. The December holiday should be the celebration of the winter solstice, especially as Christ was apparently born sometime in September.

Anyway, back to the book, I didn’t like this one as much as My Antonia as the subject and the setting didn’t appeal to me as much. I was amazed to read that this book had been banned at various times, according to the Wikipedia article.

4 thoughts on “Death Comes for the Archbishop by Willa Cather”