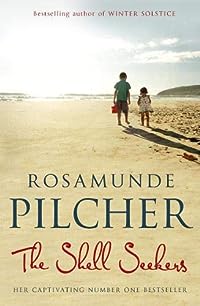 This book was first published in 1987 so I’m really late in getting around to reading it. I know it was amazingly popular when it first came out but I was surprised when I looked at the BBC Top 100 book list that this one is number 50 on it. It’s for that reason that I thought I would read it and the fact that Rosamunde Pilcher has lived in nearby Dundee since her marriage to a Scottish soldier in 1946 and brought up her family there. So I suppose she can be regarded as a Scottish writer.

The Shell Seekers is set all over the place though with Edinburgh just being mentioned a few times. The main action takes place in the English Cotswalds and Cornwall and the story is a family saga which encompasses three generations of the Stern/Keeling family.

Laurence Stern is an artist who marries Sophie, the daughter of a friend. The huge age gap between the couple doesn’t seem to be a problem and their only child, Penelope enjoys a Bohemian lifestyle with her parents, living in London, Cornwall and France until the outbreak of World War II. After hearing about what was going on in Germany from some refugees Penelope decides to join the WRENs the next day but it isn’t exactly the sort of war work which she had been hoping to do as she’s a glorified servant, waiting at tables and she regrets joining up. It’s just the beginning of her troubles.

In later years with three grown up children Penelope discovers that her father’s paintings have become fashionable again and are fetching eye-watering sums of money at auctions. Unfortunately two of Penelope’s children have turned out to be a lot like their snobby, avaricious father and they are determined to persuade her to sell The Shell Seekers which is a large painting which was given to Penelope by her father and she is one of the three children portrayed in it.

I enjoyed the book, it’s an old fashioned family saga I suppose and as most of us have experience of growing up within a family and the same sorts of situations come up all the time, just because of the multiple personalities involved, it all has a sort of recognisable feel about it but it has the advantage that it doesn’t put your blood pressure up, as it would in real life!

Admittedly we don’t all have expensive paintings hanging on our walls but you know what I mean, there aren’t all that many families around who don’t have someone in it who feels hard done by, and of course they are usually the very ones who are the most selfish and self-centred. It all makes for a very cosy experience, now I’m looking forward to starting Rosamunde Pilcher’s September soon. I’m not sure if it is regarded as a sequel but it certainly has one of the characters in it.

I had intended to review this book around about St Andrew’s Day (Nov 30) – but I decided to read September for that date as that book is actually set in Scotland.

6 thoughts on “The Shell Seekers by Rosamunde Pilcher”