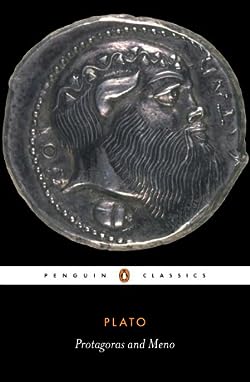 I first read these dialogues a few years ago, not long before I started blogging. My son was sent Protagoras and Meno when Penguin did a pot luck book giveaway. When I saw what he got I thought, How unfortunate – or words to that effect! I thought it would be dry and dusty but I was completely wrong. This translation by Adam Beresford is a really enjoyable, smooth read and it even has humour.

So I was happy when I realised that The Classics Circuit was having an ancient Greek Tour because it gives me the opportunity to spread the word to anyone else who hasn’t read it.

The dialogue begins with Socrates speaking about Protagoras the famous sophist to a friend and gives him the news that Hippocrates had woken him, wildly excited because he had heard that Protagoras was in Athens. The young Hippocrates wants to pay to become a pupil of Protagoras but Socrates isn’t so sure that he should do so.

What does Hippocrates hope to gain from it and doesn’t he realise that he’ll be handing over his soul not knowing whether it is to something good or bad? Hippocrates thinks he knows what a sophist is – it’s someone who has sophisticated knowledge and is a master at making people skilled at speaking.

Socrates points out to Hippocrates that he wouldn’t hand over his body to someone if he didn’t know whether it was going to end up in good or bad shape. So why would he be less careful with his soul?

Socrates and Hippocrates end up going round to Callias’ house where Protagoras is and continue the philosophical conversations with more sophists. I found it very interesting anyway.

Meno is a dialogue mainly between Socrates and Meno but also involving a slave and Antyus a politician. It’s about virtue, and Meno asks if goodness can be taught, or is it natural to some people?

Great stuff! I recommend it to anyone who is a wee bit wary of Greek philosophy, as I was.

Thank you Rebecca for organising the tour.

10 thoughts on “Protagoras and Meno by Plato”