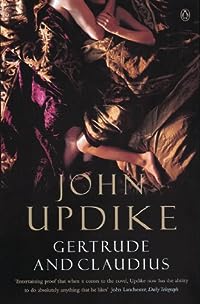 This was one of the books which I snapped up from last month’s library book sale. I thought that it was about time that I read something else by Updike. I really enjoyed the ‘Rabbit’ series and Couples years ago and I’m slowly working my way through a massive tome which I think contains every short story which Updike ever had published.

Apparently Gertrude and Claudius was his 51st book, that’s some output, and I didn’t even bother to read the blurb before buying it so I was really surprised at how different this one was from the other ones that I’ve read so far.

It’s the story of Gertrude and Claudius from before they even got married and became King and Queen of Denmark and leading up to just before Shakespeare took up the story of Hamlet. Updike used the same legends that Shakespeare had based his play on and writes a backstory for us which I found to be really readable and somehow completely likely.

Written in three parts, the first part begins with Gerutha the 16 year old daughter of King Rorik being nagged by her father into a marriage with Horwendil the Jute. She eventually gives in and does as her father wishes but she never really feels that Horwendil has deep feelings for her. Gerutha thinks her husband married her to make it more likely that he would gain the Danish crown from Gerutha’s father when he dies. Gerutha gives birth to Amleth who is a difficult and sickly boy who grows up to spend most of his time away from home. Inevitably Gerutha blames herself for her son’s shortcomings.

In the second part Amleth’s name has changed to Hamblet and he is being a perpetual student, still studying at Wittenburg at the age of 29, much to his father’s rage. If Hamblet doesn’t come back to Elsinore there’s no chance of him being elected as King in the future.

By the third part of the book all of the names have been Romanised, hence Gertrude and Claudius. I enjoyed the book, I usually like books with a Scandinavian setting, and the moral of the tale is, I suppose, bad things happen when people feel unloved and hard done by.

4 thoughts on “Gertrude and Claudius by John Updike”