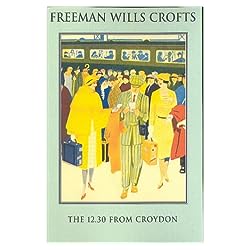 I had completely forgotten about Freeman Wills Crofts until I saw this book in my library. I had never read any before although I’d handled the books often enough in the past, I always got his name mixed up with that shoe shop chain – Freeman Hardy Willis, do they still exist? So I was quite surprised to find out that he is regarded as one of the ‘Big Four’ of the Golden Age of Crime Fiction.

First published in 1934, The 12:30 from Croydon is crime fiction with a difference because you know who the murderer is and how he has talked himself into committing murder. The mystery is – will he get off with it and if not how did he slip up?

I ended up thoroughly enjoying this one and I’m looking forward to reading more of his books which have been reprinted by House of Stratus. At first I was not at all sure I would like it because it begins with Rose Morley, her father and grandfather taking a flight to Paris. The whole experience is described in detail as obviously in 1934 very few of the readers would have been on an aeroplane and this would have been seen as an exciting start to the book. Nowadays it just isn’t and what was cutting edge when the book was first published is now charmingly old-fashioned. Apparently there was an air-station at Victoria,London which I’m presuming was just a part of the bus station where you boarded a bus for the airport.

Luckily Freeman Wills Crofts wrote quite a lot of books, so I’ll be tracking them down soon, hopefully via the library although I believe Peggy Ann has managed to get one from Project Gutenberg.

8 thoughts on “The 12:30 from Croydon by Freeman Wills Crofts”