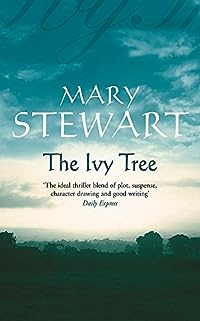 The Ivy Tree is Mary Stewart’s version of Josephine Tey’s vintage crime book Brat Farrar. I read that one last year and really liked it so I was a bit dubious about reading the Stewart take on the same sort of storyline.

It’s set in a farm in Northumberland in the north of England, Roman Wall country. The elderly owner is failing fast and there’s doubt as to who the property will be passed on to after his heir, his 18 year old grand-daughter Annabel, walked out after a row eight years previously, never to be seen or heard of again.

His great-nephew, Con, is desperate to get his hands on the farm and when one day he sees Annabel’s double, a young stranger from Canada, he and his half-sister Lisa cook up a plan to secure the farm with the help of the doppelganger.

Initially I thought it was a wee bit of a cheek on Mary Stewart’s part to so blatantly nick Josephine Tey’s idea but she mentions her several times in The Ivy Tree and I like to think of Stewart reading Brat Farrar and saying to herself “I could do better than that” – and she did!

There were unexpected twists and turns right to the end of The Ivy Tree, and you can’t say fairer than that.

12 thoughts on “The Ivy Tree by Mary Stewart”