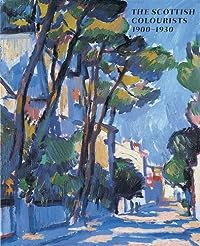 This is one of the books which I pick up and dip into every now and again, I suppose you’d call it a coffee table book. It has over a hundred illustrations of beautiful colourist paintings by F.C.B. Cadell
J.D. Fergusson
G.L. Hunter and
S.J. Peploe
who were the most famous artists of the Scottish colourist movement. You can see some images here of colourist paintings or art which has been influenced by them.

The paintings are gorgeous and I have the added excitement of recognising lots of the subjects in the paintings as most of the artists painted beaches and cottages in Fife and the east of Scotland, as well as rivers and hills in the west of Scotland.

They did get further afield though and there are plenty of paintings of places in France and various other places that attract artists.

If you ever get a chance to see an exhibition of their work you should jump at it as I don’t think you’d be disappointed. The museum in Kirkcaldy has a very good collection but sadly it’s closed at the moment whilst work is being done on the building.

The first time I went to a colourist exhibition as soon as I entered the gallery I saw a beach painting and I said that must be a beach in Scotland, because there were several people on the beach and they all had their coats on! A typical Scottish July probably. But we can’t complain this year because my closest beach has already had people sunbathing on it – in bikinis. In March – unheard of!

I might show you some photographic evidence of that soon – well maybe not the bikinis!