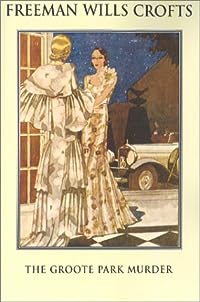 This is just the second book by Freeman Wills Crofts which I’ve read and although I didn’t enjoy it quite as much as The 12.30 From Croydon it’s still well worth reading if you’re into vintage crime.

The first half of this one is set in South Africa, when a man’s body is found beside a railway line on the edge of Groote Park. It’s assumed at first that there has been a horrific accident, but things don’t add up and Inspector Vandam begins to suspect foul play.

In the second half of the book the action moves to Scotland and I must admit that I preferred that part of the story. How parochial am I? (Don’t answer that!)

Anyway, it so happend that all of the Scottish locations are well known to me and it’s nice when you know exactly what it looks like when Princes Street or Queen Street is mentioned, even if you still have to imagine what it looked like in 1923, which is when the book was first published. It was enjoyable to be in Glasgow’s streets and then to travel north to Alexandria, Loch Lomond and Crianlarich – in an attempt to unravel the mystery.

I’m hoping to be able to read Inspector French’s Greatest Case soon, which is the book in which Crofts introduces us to the character who was described by someone in the Guardian’s Notes and Queries recently as the greatest fictional detective ever.

Which one would you plump for? I’m not sure, I still have a soft spot for Dorothy Sayers’s Lord Peter Wimsey and Margery Allingham’s Albert Campion sort of grew on me, although to begin with he was just too much of a silly-ass upper class Englishman for me. There’s a trend forming here – I must be into posh chaps!

Going off at a bit of a tangent – I was doing the dishes tonight and listening to BBC Radio 4 Extra – or whatever they’re calling it this week, and they were broadcasting an episode of Dalziel and Pascoe, which was written by Reginald Hill. I’ve watched the TV dramatisations but not read the books but I think I’ll have to give them a go. I really liked the character Andy Dalziel (pronounced Dee-ell) although he could in no way be described as posh and the actor playing him on TV best resembles a bulldog chewing a wasp. Has anyone read anything by Reginald Hill?

10 thoughts on “The Groote Park Murder by Freeman Wills Crofts”