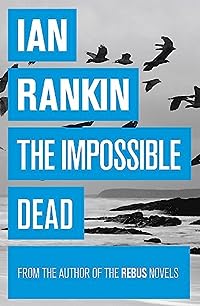 This is the second Malcolm Fox book and he’s still a detective in The Complaints department which is based in Fettes Avenue in Edinburgh, they investigate any police officers who are suspected of being up to no good. Along with his colleagues Naysmith and Kaye, Fox travels to the police station at Kirkcaldy in Fife so that they can interview police officers who have been implicated in a recent court case which has resulted in the conviction of a detective at the Kirkcaldy police station.

That happens to be my local ‘cop shop’ and most of the action in this book takes place within a short distance of where I live, and of course as Ian Rankin is almost a local lad, being brought up in another nearby Fife town, it’s an area which he knows very well. It was quite strange but at the same time a wee bit thrilling to recognise all the shops, tea shops and housing estates which they frequented, if you know the area you’ll even recognise particular lay bys! I must say that Rankin portrayed the town exactly as it is.

I think I enjoyed this one even more than the first one in this series, (The Complaints) although how much that is because of the local interest I can’t say.

In this one Fox has to dig back in newspaper archives to discover why a retired policeman had been investigating the death of a prominent Scottish politician in 1985. Was it suicide or did MI5 have something to do with it?

There certainly were some things going on in the 1980s, a few Scottish so called terrorists did rear their ugly heads. The rest of us were quite mystified why anyone should want to be extreme and violent. It didn’t amount to much anyway and I recall that the biggest incident was when a ‘bomb’ had been left on the railway track close to my then local railway station. People were not chuffed at the trains to Glasgow being delayed, me included. It turned out that the perpetrators were a couple of local numpties that I knew, from a distance. They were jailed for several years for their efforts.

Of course, Ian Rankin’s book is a work of fiction but it does sort of imply that there was a problem with terrorism in Scotland in the past – and really there never was such a problem. The thing in Scotland, particularly the west, has always been the religious bigotry. Thankfully that doesn’t seem to be nearly as bad as it used to be as fewer parents send their children to faith schools, where they used to be taught that they were different (superior) to the children at ordinary state schools. Tony Blair was keen on allowing more faith schools and unfortunately the Conservative Party is now all for religious schools too. In fact they really want schools which are staffed by low paid ‘teachers’ with no qualifications. Fools!

14 thoughts on “The Impossible Dead by Ian Rankin”