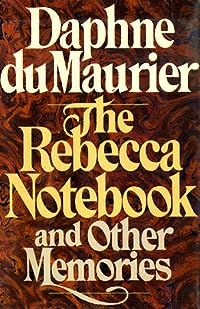 I was lucky enough to pick up this book in an Edinburgh bookshop. It was just lying amongst sundry miscellaneous books, in a basket on the floor. So I was really surprised when I had a look inside it and discovered that it had been signed by Daphne du Maurier, it’s a hardback and in perfect condition. It was cheap too, so I had to buy it!

If you’re into Daphne du Maurier I think this is a book which you will want to read. Over the years I’ve heard that du Maurier was a bit of an odd bod – one of the awkward squad, but honestly, which of us isn’t at some time or another?!

Anyway, I was a wee bit trepidatious about reading the book as if I don’t like an author it doesn’t half put me off reading their books, I know, silly but true. All was well though as I think that the author’s voice came through really clearly and I DID like her. In fact I agreed with her about lots of things.

This book was first published in 1981 and as she says, it was almost 40 years since she had written Rebecca but she still had her notebook in which she had jotted down her plans for the outline of the book, quite detailed really and a must read for any devotee of Rebecca.

The rest of the book contains 11 prose pieces, not articles as such she says, for she had never been a journalist. They come under the heading of Memories and some are her reminiscences of her father and grandfather. Others are her thoughts on subjects such as Romantic Love, Death and Widowhood, Moving House, and A Winter’s Afternoon, Kilmarth – to name a few of them.

She was a woman for whom houses seem to have been the most important thing in her life. Possibly her children felt that Menabilly, her house in Cornwall for 25 years, was more important to their mother than they were and I suppose that would be more than a bit annoying.

It’s interesting to note that Daphne du Maurier didn’t actually own either of the houses she lived in in Cornwall, she rented them on long leases from the family which had owned them for generations. Times have changed so much since those days, people equate owning a house with success and stabilty now and hate the thought of having to rent.

I had also completely forgotten that Daphne’s father had been related to the ‘Darling’ family of Peter Pan fame, or in other words the Llewelyn-Davies family. Sylvia L-D was Daphne’s aunt and she writes about the family in the article titled Sylvia’s Boys who were of course well known to her as they grew up together. J.M. Barrie was known to them all as Uncle Jim at a time when he had umpteen plays on in various London theatres, he did far more than just write Peter Pan. What an advantage for an aspiring writer!