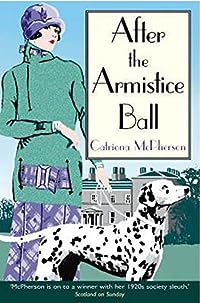 This is the first Dandy Gilver mystery and it was published in 2005. I had previously read the fourth in the series, The Winter Ground, which I liked enough to want to start the series from the beginning.

I enjoyed After the Armistice Ball even more than I thought I would, for one thing it was nice to discover how the upper-class Dandy and her sidekick Alec got together as a couple of amateur sleuths. Alec is also well-heeled but hails from Dorset, he is due to get married to Cara Duffy who comes from Edinburgh and Perthshire. The Duffy family diamonds have apparently gone missing, thought to have been stolen from Croys, a large house near Kingussie which belongs to the Esslemonts. It’s now 1922 and since the end of the Great War there has been an annual Armistice Ball at Croys and Lena Duffy is going around telling everyone that the diamonds must have been replaced by paste during her visit to Croys.

Daisy Esslemont asks her friend Dandy Gilver to investigate the whole thing, which involves blackmail and subsequently murder, or was it suicide? On the whole I found this book to be really entertaining, it might have been improved with a bit less travelling backward and forward to Galloway, but it has a good feel of the period and I found Dandy and Alec to be likeable and realistic characters. Dandy has a nice line in sarcastic wit.

6 thoughts on “After the Armistice Ball by Catriona McPherson”