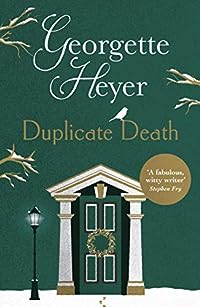 Because we were away in the Lake District it took me much longer than usual to read this book. I usually like to read detective fiction in 3 or 4 big chunks over a couple of days, but this must have taken me about a week in dribs and drabs. Because of that I only gave it 3 on Goodreads but I suspect it would have been a 4 if I had been able to read it as normal.

First published in 1951 and set in London, two similar murders are committed in the same house just two days apart, as you would expect given the book title. The house belongs to Mrs Haddington, a ghastly social climbing sort of a woman with a spoiled little madam of a teenage daughter, named Cynthia.

There are several possibilities as to the culprit or culprits and Chief Inspector Hemingway and Inspector Grant have the job of investigating the crime. Grant is of course Scottish and as he has just come back from a holiday in Inverness his speech is more Scottish than it would be normally, in fact he speaks quite a lot of Gaelic phrases, thus proving that Heyer went to the trouble of learning more Gaelic than I have. But then I’m a Lowlander and I know nothing much beyond sgian dubh.

Anyway, it kept me guessing to the end which is always a plus and there is the usual witty dialogue which Heyer is so good at writing, especially between the love interest which she always has to have, even in her murder mysteries.