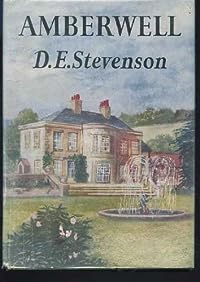 If you have only read D.E. Stevenson’s Mrs Tim books you might be a wee bit disappointed that this one is not more of the same, it doesn’t feature humour at all, but I still found it to be an enjoyable read.

The Ayrtons are what many families are nowadays, a bit of a dolly mixture family. The two boys’ mother died after having her second son and Mr Ayrton remarried, his new wife had three daughters. Desperately disappointed at only having girls, the second Mrs Ayrton showed no interest in them and left it to her staff to bring them up. School for the girls was not allowed and they were never taken out for treats, no pantomimes for them, they hardly ever left the grounds of Amberwell, which is the name of the house and estate which their father owns.

The parents were completely self-centred and autocratic and the children grew up with a strong love for the house and their surroundings and little contact with the outside world.

Eventually world affairs break into Amberwell, with the start of World War 2 and the boys, Roger and Thomas go off and ‘do their bit’. Mr and Mrs Ayrton are really only concerned about the loss of their workforce as able bodied men join up.

Set on the west coast of Scotland, which is where I grew up, this book has exactly the right feel of how it was to grow up in such a society, where girls were only seen as being useful for doing the housework. Obviously D.E. Stevenson had this same experience herself as she was not allowed to go to university, her father did not want an educated daughter.

Things moved slowly in that society and it was only fairly recently that I realised that amongst all of my schoolfriends, the only girls who got to university were the girls who had no brothers, and that was in the 1970s. I remember reading in one of Mary Stewart’s Merlin books the phrase – girls don’t count in Scotland – so I suspect that she had noticed that too.

Anyway, it’s a bit of a comfort read, despite having a serious storyline about the damages inflicted on young lives when they don’t feel cherished.

One other thing which I have noticed about D.E.’s books is that she always seems to make a point of mentioning her famous forebears. Often it’s Robert Louis S, her second cousin but she was obviously equally proud of her lighthouse engineer Stevensons too, I find it very human and somehow charming that she gives them a name check in passing.

7 thoughts on “Amberwell by D.E. Stevenson”