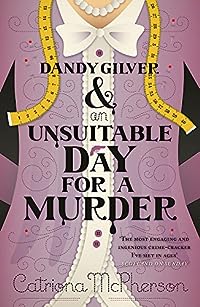 I enjoyed this one a lot although it might appeal to me more than to most people purely because of the setting, which is Dunfermline in Fife, a town which I know well.

The setting is 1927 and Dandy Gilver has been called to Dunfermline to search for a young woman who has disappeared. Mirren is the only child of a family who own a department store in Dunfermline. The Aitkens have been in business in the town for 50 years and when Dandy gets there they are busy celebrating their golden anniversary, the town is throbbing with the excitement of the day but it isn’t long before things take a nasty turn and Dandy has a lot of unravelling to do, amongst the three generations of the Aitken family.

Add the Hepburns, the owners of the rival department store in Dunfermline into the mix, and it all leads to a maze of twists and turns which at times I had a wee bit of trouble with, mainly because of all the various family members involved.

‘They’ do say that there are only seven plotlines in fiction and at first this one would seem to be the Romeo and Juliet story, but Sir Walter Scott’s phrase ‘Oh what a tangled web we weave when first we practice to deceive’ from his poem Marmion – best sums up the goings on in this book I think.