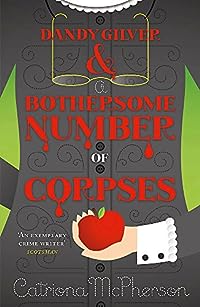 Most of this book is set in a girls school in the village of Portpatrick in Galloway in the south west border country of Scotland, not a place which I know well, the combination of the two settings meant that I didn’t enjoy this one as much as her other Dandy Gilver books.

Dandy is called by two of the Lipscott sisters whom she has known since she was a young thing, they need her help. The Lipscotts are an eccentric family and Dandy still fondly remembers the time she spent with them in the past.

When she hears that the youngest sister is working as a schoolteacher at a school which has a habit of ‘losing’ teachers, Dandy has to investigate.

I think that Catriona McPherson was smart to make Dandy an Englishwoman, married to a Scotsman and living mainly in Scotland as it gives her ample scope to comment on Scottish culture and traditions, but not in a snide way.

For instance: “I know that the leftover soup from a Scotswoman’s kitchen is not for the fainthearted, given its starting point of rib-sticking heft and the nature of the inevitable barley which works away long after the cooking is done, so that sometimes second- or (I have heard tell of it) third-day soup, can just as easily be eaten with a fork as with a spoon.”

That made me laugh as I always have a pot of home made soup on the go and Jack has been known to say ‘cut me a slice of soup please.’