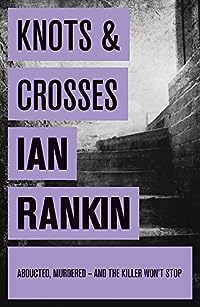 At last I’ve got around to reading Knots and Crosses, the first in Rankin’s Rebus series which I’ve stupidly been reading all out of order. Laura recently gave me a copy of the book and I thought it would be a good idea to read it just after James Oswald’s Natural Causes, to compare their first police procedural forays.

Set mainly in Edinburgh of course, where there have been abductions and subsequent murders of young schoolgirls. What do the girls have in common, what links them to the perpetrator, why is Rebus being sent bits of string in envelopes?

I did enjoy this book which is mainly introducing Rebus to us and he is a character that I really like. On that score I did think it was a wee bit unbalanced as for me there was just a bit too much Rebus compared with the crimes and sleuthing. There were a few areas of the book which went ‘clunk’ on my ear and which I’m sure Ian Rankin would write differently now, but the first one of any series will inevitably be awkward compared with the following ones.

All in all, I do think that James Oswald’s first book Natural Causes is better than Rankin’s first effort – so no pressure then for James!

As I’ve been accompanying Rebus in his smoking, hard drinking and consequent hangovers I decided to give my liver and lungs a bit of a detox and opted to read a vintage crime by Patricia Wentworth next, a Miss Silver mystery, The Clock Struck Twelve. More on that soon.

6 thoughts on “Knots and Crosses by Ian Rankin”