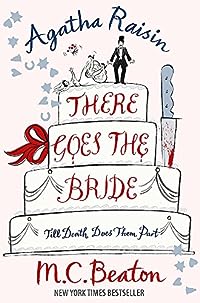 I’m on a bit of an Agatha Raisin kick at the moment, well they’re easy reading which is just what I want for now and there have been quite a few available to borrow at my library recently, sometimes I don’t see any there for ages.

Anyway, in this one Agatha has been invited to go to her ex-husband’s wedding, it’s the last thing she wants to do but she feels she has to show her face. It turns out that James Lacey, Agatha’s ex, is having second thoughts about his forthcoming marriage, he has just realised that his future in-laws are ghastly, but he feels it’s too late to call it off.

Another enjoyable romp, although this is the 20th book of the series and I’m not so keen on the later ones because Agatha has her own detective agency and several members of staff. I preferred it when she was more or less on her own and a complete amateur.

Strangely the in-laws in this book are named George and Olivia, which seems to be a combination of names which Beaton likes for ghastly characters as she used them for a completely different couple in the last book of hers which I read. I wonder if she was inspired by a real couple of her acquaintance with those names!

3 thoughts on “Agatha Raisin There Goes the Bride”