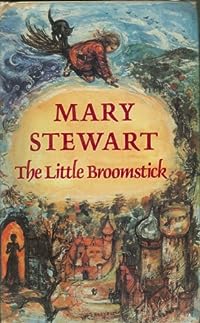 When Anbolyn@Gudrun’s Tights first mentioned her Mary Stewart Reading Week I thought that it was a great excuse for me to re-read the Merlin books which I adored as a teenager yonks ago. Then I realised that my own copies have already been packed away in the hope of downsizing soon, so when I was browsing in an Edinburgh bookshop just a few weeks ago and came across a lovely 1971 copy of The Little Broomstick – which I hadn’t read before, it seemed like a sign, so I bought it.

Mary Stewart wastes no time in doing what has to be done in every successful children’s story, that is, she gets rid of the parents. It has to be done because those annoying parents are such a dampener to an adventurous spirit!

Mary Smith is ten years old and feels rather lonely, even within her own family. Her brother and sister are twins and five years older than her, talented and attractive. Everything about Mary is plain, even her name.

When their parents have to go to America for a month on business, it’s decided that the twins will stay at a friend’s farm whilst Mary would stay with Aunt Sue. At the last minute Aunt Sue’s children come down with the flu so poor Mary is sent to Great-Aunt Charlotte who lives in a rambling old house close to woods and cherry orchards.

Nobody in the household wants to be bothered by a small girl so Mary finds a friend in a wee black cat which leads her through the woods to a patch of magical flowers. She discovers that when she accidently transfers some of the flower pollen from her hands to a small besom (brush) which she had been using to sweep up the autumn leaves, it turns into a magical broomstick which whisks her and Tib the cat away to Endor College which turns out to be a training college for young witches. A large sign declares that TRESPASSERS WILL BE TRANSFORMED.

The headmistress Madam Mumblechook welcomes her new student, thrilled that she has brought her ‘familiar’ with her, in other words Tib the cat.

Mary discovers that there’s a roomful of strange caged animals, unlike any animals known to man and they are all desperate to be relieved of their misery and it isn’t long before her Tib joins them in their plight. Mary just has to save them and herself!

Like all good children’s books this one will appeal to children of all ages. Looking back to 1971 when it was written I’m assuming that it was the fact that at that time there were a lot of animal experiments going on in laboratories, torturing rabbits with shampoos, make-up and chemicals in general, and forcing beagles to smoke 50 cigarettes a day – oh yes, believe it! There were a lot of animal rights people going about kicking up a row about it all, unfortunately some of them took it a wee bit too far and started setting mink free from fur farms. I can only assume that they were under the impression that furry = cute because they are still causing devastation in our wildlife today, there aren’t many British animals which can defend themselves against mink.

So that’s the backdrop which I think gave Mary Stewart the idea for this exciting adventure story. What I’m wondering though is – did J.K. Rowling read it as a child and did it give her the idea for the Harry Potter books? I haven’t read any of them myself but there seems to be quite a lot of similarities on the surface anyway. Spell lessons and teachers with names like Madam Mumblechook and the like.

On a personal note, I remember adoring the Merlin series as a 16 year old and Mary Stewart does mention Dumbarton Castle in one of them, that’s the Castle Rock which is at the left hand of my header. I thought about writing to her and asking her if she had seen it mentioned anywhere in books when she was doing her research on the subject. I decided against writing to her because I thought that she was a vey old lady who shouldn’t be bothered by the likes of me. Now almost 40 years later she is celebrating her 97th birthday, which just shows me that she was just a spring chicken 38 years ago – that’s young folks for you, they think everyone over 30 is ancient. Long may she continue!

Thank you Anbolyn for hosting the Mary Stewart Reading Week.

11 thoughts on “The Little Broomstick by Mary Stewart”