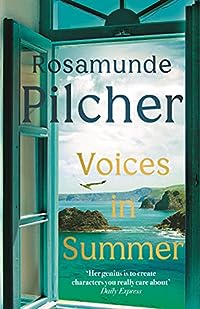 Voices in Summer was first published in 1984, which seems like yesterday to me but I had to remind myself that it is actually 30 years ago – amazingly. A few times in the book there is reference to a character looking for a telephone box to call someone and things like that really date it. I don’t know about you but any mention of a phone box and I can smell one, not a pleasant memory I’m sure you’ll agree. I can imagine that some younger people will be reading Pilcher’s books for the charmingly nostalgic atmosphere, the way my generation reads books like Angela Thirkell’s, harking back to a gentler society – even in wartime!

Voices in Summer is set in Cornwall, which is where the author was born and grew up but she married a Scot and after that she lived in the Dundee area I believe. She certainly lived most of her life in Scotland and is generally regarded as a Scottish author.

This one is a light read, good for beach reading or when you’re travelling and don’t want to concentrate on much. It’s a bit of a romance with some mystery thrown in for good measure.

Laura is recently married, to Alec a well off businessman, and their story begins in London where they live. Laura is Alec’s second wife and she feels the presence of her predecessor hanging heavily in the house. Not that the first wife is dead, but she ran off with a younger man and poor Laura is having to live in her house with her choice of furniture and has even inherited the first wife’s friends.

I saw shadows of Daphne du Maurier’s Rebecca in this one, there are quite a few similarities, not that it comes up to the standard of Rebecca. I’m the sort of reader who enjoys a lot of description in books, especially of landscapes but I do feel that Pilcher takes it all just a wee bit too far and she leaves nothing to the imagination. It’s almost as if she is writing in the stage directions too.

I mention that because I think that there are times when there are just too many words and it all gets in the way of the storyline and I just want to say to her — och get on with the tale!

Never happy – I hear you say. Or pernickety besom!

Of course this is another one which I read for the Read Scotland 2014 Challenge.

2 thoughts on “Voices in Summer by Rosamunde Pilcher”