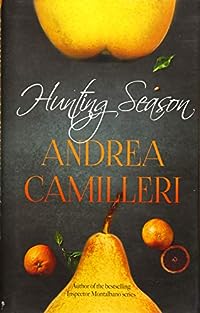 I picked up Hunting Season by Andrea Camilleri from the library thinking that it was another Inspector Montalbano book and I was quite disappointed when I got home and realised that it isn’t. It is set in Sicily but it’s Sicily 1880. A strange young man called Fofo arrives in Vigata and the townsfolk are concerned when they find out that he is the son of a local peasant who had been murdered years before.

Fofo sets up as a pharmacist and becomes quite popular as he’s a useful member of their society, but the place is run along feudal lines really with the local member of the so-called nobility Don Filippo, a philandering marquis at the top of the pile. There are a fair few murders, but along the way there are also a lot of people jumping into bed with folks that they really shouldn’t be there with. It seems that Sicily of 1880 was a free and easy place.

I didn’t enjoy this book nearly as much as the Inspector Montalbano books.

Apparently the author got the idea for writing the book from the old British film Kind Hearts and Coronets, it’s one of my favourite films an old one from 1949 and I think you can watch it free online.