As it’s Burns Night tonight I made the vegetarian haggis from the recipe which was in the Guardian earlier in the week. You can see it here. I’m not inflicting a photo of my version as haggis is never appetising looking but it tasted good anyway. I changed it slightly, substituting soy sauce for the Marmite as I hate the stuff and I added more pulses in the shape of haricot and cannellini beans. I also halved the quantities as there are only the two of us around the table nowadays, but I still have plenty leftover – so no cooking required tomorrow, luxury!

Below is a photo of the 1000 piece jigsaw puzzle which we began about a week ago when the weather was really cold and we were just semi hibernating. It didn’t take us as long as I thought it would. The worst part was definitely the road/pavement at the bottom of the picture, the cobble stones. I originally thought it was Starry Starry Night (or The Starry Night) but it isn’t. It’s The Cafe Terrace at Night. 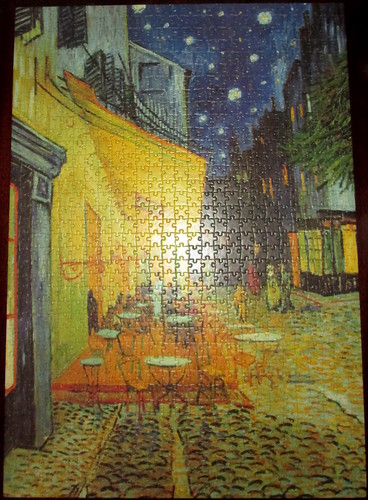 Now when you are reading or saying van Gogh remember to pronounce the ‘gh’ properly – a lovely guttural sound as in the word ‘loch’ – none of this Vincent van Go nonsense! In fact the first G should be guttural too.

I’m now searching for another jigsaw puzzle which I bought recently, it’s of a British Rail poster of The Trossachs. I tidied it away before Christmas and now I can’t find it, don’t you just hate when that happens. That’s my excuse for preferring clutter, at least then I know where everything is!

Have you seen the Laurel and Hardy film which is about a disaster which befalls Ollie when Stan starts a jigsaw puzzle – hilarious.