I have a lot of collections of ‘stuff’, often completely useless and worthless but just pretty, such as shells and stones and there are the books and china of course, old brooches and boxes, old postcards… the list goes on and on. But I’m absolutely not going to start a collection of Blackie’s Annuals although I believe they are collected by a lot of people. 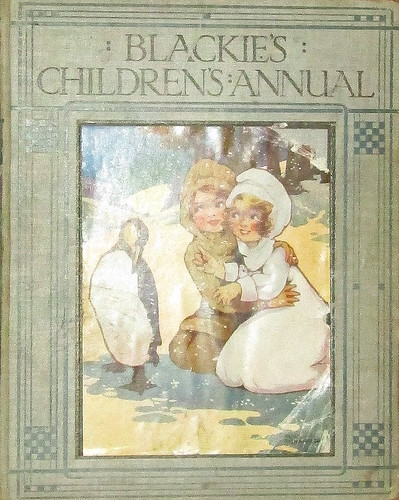 I just came across this one at the weekend whilst looking for something completely different – a set of pine shelves which I want for the kitchen but am having no luck finding. In fact today I just bought wood to have a go at making them myself, with Jack’s help. I wish I had been able to take woodworking classes when I was at school, I would have loved that.

Anyway, I’m rambling, back to Blackie’s Children’s Annual, I couldn’t resist buying this one but unfortunately it doesn’t have any clue inside it as to when it was published. It must have been sometime during World War 1 because of the endpapers, beautiful wee soldiers, in kilts too albeit rather short ones. 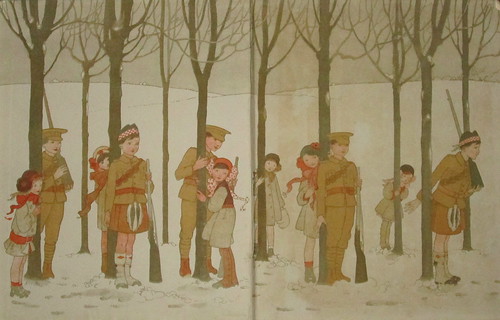 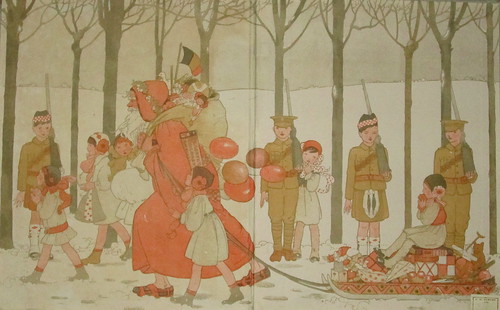 Also the very first story in the book is about a father going to war, he’s in the Special Reserves and the family’s ‘fraulein’ is having to return to Germany. So I’m plumping for Christmas 1914 for the publication date although Jack thinks they wouldn’t have had time to get it published in time for Christmas 1914. I think it was probably all ready long before Christmas and they just added the first story about the war and the endpapers to catch the spirit of the times. After all – the war was going to be finished soon wasn’t it?!

Actually I’ve just realised that the front cover was almost certainly designed by Charles Rennie Mackintosh as he did a lot of work for Blackie’s books as well as designing Hill House in Helensburgh for him.

If you’re interested there are more images of Blackie’s books here.