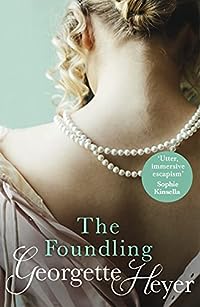 The Foundling by Georgette Heyer is quite different from the other romances which I’ve read by her. For one thing it isn’t really a romance as close to the beginning the young Duke of Sale is pushed into agreeing to marry an old childhood friend and cousin, Lady Harriet. The Duke was orphaned at a very young age and his guardian and uncle Lord Lionel has molly-coddled him all his life as he was a rather weak and sickly child.

Lord Lionel likes to be in control of everything and his over-bearing attitude makes Sale wish he wasn’t an aristocrat so when a relative gets into some woman trouble, Sale jumps at the chance to help out, leaving his aristocratic trappings behind and travelling as an ordinary chap.

He finds himself in all sorts of adventures and serious scrapes which he manages to extricate himself from and his experiences end up giving him the confidence which he needed to stand up for himself against all the relatives and staff who are so keen to control his life.

The character of Belinda, a young woman who has also run off from her former life makes for quite a lot of comedy as she agrees to go off with any man who says he will buy her a purple silk gown. It’s quite a task for the Duke to save her from her daftness.

2 thoughts on “The Foundling by Georgette Heyer”