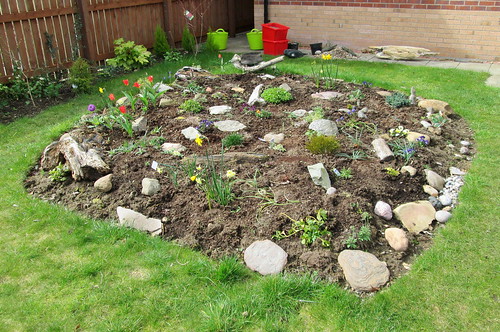 I thought it was about time I showed you how my garden is getting on again. This is the rockery, as you can see from all the gubbins in the background I’ve been hard at it, hauling stuff about in buckets – gravel, turf, weeds and soaking the roses before planting them in the garden. Since I took the photo the grass has been cut, it was reports of rain to come which galvanised Jack into that action, and indeed the rain did appear this evening but we can’t complain as we’ve been basking in warm sunshine for days now with the daytime temperatures being way above average.

The photo below was taken about a year ago, just after we moved to our new place, and I was just marking out the general shape of the rockery. The main reason for having one was to get rid of the grass and cheer the place up a bit. We couldn’t budge the concrete blocks which can be seen at the top of the photo, they had been the base of the previous owner’s summerhouse so we ended up sticking another summerhouse on top of them. 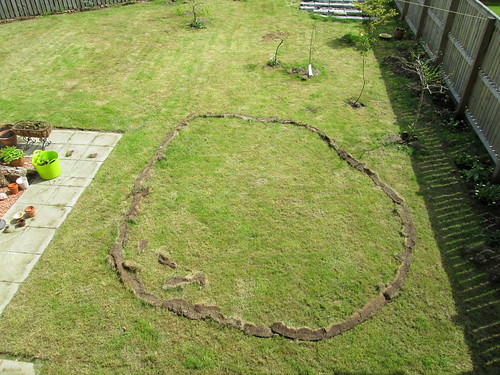 Below is a photo of that part of the garden as it is now, well actually it looks a bit better now as we have added Rosemary tiles (standard red roofing tiles) to the bottom of the summerhouse/shed at the front, just to hide the unsightly base. I’m growing a low box hedge around the rest of it. We have created a sitooterie area just outside the summerhouse, that’s what I’ve been doing this week, there’s still work to be done but I feel that we’ve made good progress. 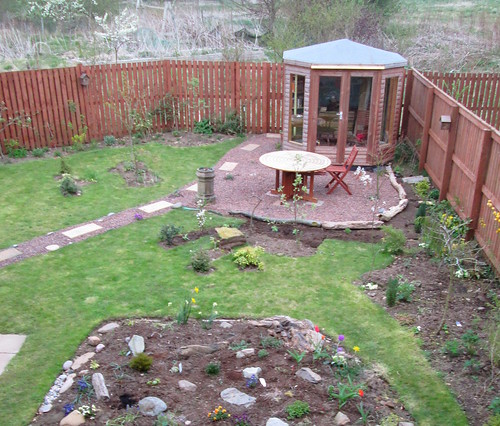 The garden design is completely different from what I imagined I would do when we moved here just over a year ago. It was just a sea of grass and I had planned to make a large pond more or less in the middle of it, with a wooden walkway across it linking the two areas. Then in July I realised that the midges in this new garden are hellish. Midges don’t normally bother me but I’m fairly sure that if these ones were analysed they would discover that they have shark DNA in them! So I decided that much as I would love a pond I couldn’t be doing with the millions of beasties which would arrive with it. Also the garden is more or less south facing so when the sun shines there’s not a lot of shade so any pond would end up being a thick green soup in no time. At the moment I’m making do with an old enamel bowl which the birds drink from but I plan to buy an old stone sink so that they can have a nice bath too. I had a lovely sink in my old garden, but of course I left it there. I’ve lost count of the number of times over the last year that I’ve thought to myself – I wish I hadn’t left that behind – about umpteen things!

8 thoughts on “A Garden Update”