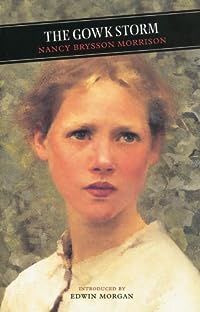 The Gowk Storm by Nancy Brysson Morrison was first published in 1933 and it features in the Top 100 Scottish books. Jack is intending to work his way through that list and he thought I would enjoy reading this one. Which I did, as did Peggy Ann, you can read her review of it here.

The setting is the Highlands of Scotland, a manse which apart from the minister and his wife houses their three young daughters. The story is told through the observations of the youngest girl Lisbet. Her two older sisters Julia and Emmy are reaching the age when they are going out and about a bit and meeting other young people, life beyond the strict atmosphere of the manse beckons but it’s a more complicated life which ends in grief.

Some people think that the story is similar to that of the Brontes and as the author also wrote a biography of the Brontes I can see why they would think that, there are three daughters and the father is a self-centred tyrranical misery, but for me it was the writing of Willa Cather which was brought to mind. The ability to conjure up a sense of place in beautiful descriptions is always a winner for me and I think it’s a very Scottish/Celtic trait in writing, where the place is as much a character as any of the people.

The tale veers towards Thomas Hardy in its sense of doom and drama, but not quite as dark and depressing as his writing can be. The Gowk Storm is described as – ‘lyrical, passionate and a real page turner.’ I’ll definitely be looking for more of Nancy Brysson Morrison’s books.

Below is a wee taster of her writing.

I sat for some time on the western side of the dyke, looking over the moor and stared at the bare ground so long that I saw it veined with deep dark colours, wine red, ruby and prune, drawn to the surface by the sun. Amongst the peat hags were little raised islands with tufts of long grasses sprouting from them, which made me think of fantastic hedgehogs. Grasses purple when in a mass, bent whispering and sighing before the wind, but I was so protected where I sat that it scarecely fanned my face.