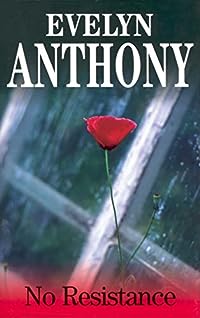 No Resistance by Evelyn Anthony was first published in 1967, but at somepoint the title seems to have been changed to The Rendezvous, – so confusing. I remember way back in the 1970s I devoured these books which are mainly set in wartime, often spy stories. I had no idea that this was the first such book which Anthony had written, despite having had a lot of books published before this one, they were all historical fiction. I don’t recall ever reading any of those ones – have you?

In No Resistance a young female French resistance agent Terese Masson has been arrested by the Gestapo. She’s interrogated by Colonel Alfred Brunnerman who employs psychological techniques to get information, but she knows that eventually he will have to hand her over to the torturer, if Brunnerman’s techniques fail.

She’s terrified, but at the same time very attracted to Brunnerman. Years later Brunnerman and Masson meet up in America where they have both settled. Brunnerman has changed his name and nationality to dodge prosecution, as a Nazi originally and latterly to foil the Israeli execution squads which are tracking down ex-Nazis.

This is the type of romance full of suspense which I find to be very enjoyable.

2 thoughts on “No Resistance by Evelyn Anthony”