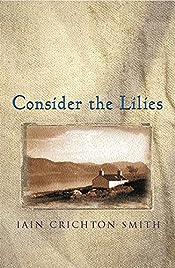 Consider the Lilies by Iain Crichton Smith was first published in 1968 and it appears in the list of Top 100 Scottish Books.

On the surface the book is about the Highland Clearances, a time when landowners (lairds) in Scotland decided that they could make much more money from their land from sheep farming rather than getting rents from crofters who were scraping an existence from the small patches of poor quality land which they were tending. The crofters were forcibly evicted from their cottages which were set fire to and pulled down so they couldn’t go back. Lots of them ended up emigrating to Canada, America, Australia and New Zealand, where they often ended up living equally harsh lives in an even more hostile environment. It’s often supposed that the landlords were English but that certainly wasn’t normally the case, although they may have been educated in England. Many clan chiefs were eager to make money in the very lucrative sheep/wool market and didn’t care who they damaged in the meantime. It was more of a class war than an English versus Scottish thing.

Anyway, back to the book, it’s really about the hard and unforgiving Calvinist Presbyterian religion which ruled the lives of the ordinary people. Their religious teaching and upbringing was so rigid and strict that all of the joy was sucked out of life. No singing, no dancing, just church and prayers and an almost masochistic attitude to life, Everything should be hard and cruel, or it wasn’t worth attaining. The minister was looked up to as being high above his parishioners who he berated as sinners despite the fact that they were all really innocent souls, certainly in comparison with most church ministers. Yet that background did seem to breed very imaginative writers. So many of the classics were written by Scots or those with Scottish parents. Such as J.M. Barrie, R.L. Stevenson. A.A. Milne, George MacDonald and lots more. A strict upbringing bred a fantastic imagination it would seem.

This is the sort of environment which old Mrs Scott had grown up in. Not long before she turned 30 she had married a man a few years younger than her, he had had a less rigid life and was more like some of the gipsies who wandered around the Highlands, so it was never going to be a match made in heaven. Alasdair had the spirit of adventure about him and after the birth of their son Iain he joined the army as a volunteer in the local duke’s regiment, who was of course the laird. Alasdair never came back from the Peninsular War, he died in battle in Spain, so Murdina (Mrs Scott) has to bring Iain up on her own with no help from anyone – despite being told by the Duke that she would receive a pension, she never did. She’s determined that Iain won’t turn out to be like his father and gives him a miserable and joyless childhood, just like her own and of course when he’s old enough he gets out as fast as he can, just as his father did. Still Murdina can see nothing wrong with her outlook on life, but when a man comes to visit her on a white horse and tells her that she will have to leave her house she can’t believe that the duke would do anything so awful to her.

She goes to see the minister to ask him for help but the minister isn’t interested in helping anyone, he’s on the side of the powerful and rich duke and Murdina at last begins to think for herself and realises what a hypocrite the man is. He doesn’t even know her name and she had held him in such high esteem all those years.

In the end it’s Donald MacLeod who helps Murdina when she needs it most, and she had always seen him as an emissary of the devil as he never went to church and would have nothing to do with the minister. He wrote political pamphlets and articles for newspapers which would be regarded as incendiary by the land owning class, but despite his supposed atheism it’s Donald who is the decent man. The experiences change Murdina’s attitude completely and instead of only seeing the bad in things she can at last see the good side. She’s cured of negative Presbyterianism.

This is a really good read, apart from telling of a hugely important part of Scotland’s history it also goes a long way to explaining the Calvinist atmosphere of Scotland which still exists today, where you can seriously say that even the Roman Catholics have a Presbyterian streak in them, you just can’t help being influenced by it.

There are some annoying anachronisms in this book as for some reason Crichton Smith didn’t think that it was important to be careful with the historical facts and so it is impossible that Mrs Scott’s husband would have been killed in the war which he was killed in. Also it is mentioned that she had food boiling in pots on Sunday and that just did not happen. No food was cooked on a Sunday, it was pre cooked on Saturday and it was just cold leftovers on Sunday. The Sabbath couldn’t be broken for anything and it was still like that in the 1970s on Skye. People who had to get water from a well always got their water on Saturday night, for washing/drinking purposes and for the animals as they wouldn’t even pull water from a well on a Sunday, it was for Bible reading only.

Jack’s review of this book is here.

It’s a weird thing, almost like that 3 buses coming along at the same time, but it often happens that completely unintentionally I end up reading a series of books which have similar themes – one after the other. I had read Annie S. Swan’s book Mistaken – which almost reads like a religious tract. Then I read this one with its Calvinist theme. So I thought to myself: I’m going to read something completely different – to get out of this religious atmosphere. So a couple of days ago I started reading Anthony Trollope’s Linda Tressel. If you’ve read it you’ll have realised that I didn’t escape religion as that book is about a young woman being completely ground down by her madly Calvinistic aunt, despite the Bavarian setting. I feel that somebody is out to get me!

2 thoughts on “Consider the Lilies by Iain Crichton Smith”