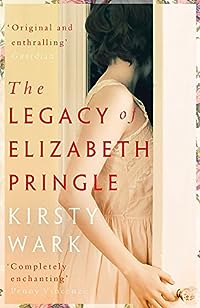 The Legacy of Elizabeth Pringle by Kirsty Wark was published in 2014. Obviously Kirsty Wark is better known for being a television journalist and presenter, and like many well known people she has tried her hand at writing. I was really looking forward to reading this one but it didn’t come up to my expectations.

The setting is Arran, a large island in the Firth of Clyde. I’ve never visited Arran but I really would like to see Arran now, so if nothing else this book might be good for the local tourist industry.

The chapters switch between Elizabeth and Martha. Elizabeth is a woman who has lived her whole life on Arran. She was born before the First World War which her father didn’t come back from and it’s her life story, involving loss of various sorts. When Elizabeth dies Martha discovers that she has left a house in Arran to her mother. But Martha’s mother is suffering from dementia and as Martha has Power of Attorney it falls to her to deal with the house.

Martha has problems of her own, apart from having to cope with her mother by herself, as her older sister is too busy with an exciting career to bother about their mother. But Martha is intrigued as to why Elizabeth would leave a house to her mother, as she has no knowledge of Elizabeth at all. Unsurprisingly she wants to get to the bottom of it.

This book begins with a sort of wish fulfillment. I mean – who wouldn’t want to inherit a lovely old house in a part of the world that they’ve enjoyed their childhood holidays in. But surprisingly there is some really quite bad writing in it. Did an editor think that they couldn’t tell Wark to do some rewriting? It’s a shame because the ideas in the book are interesting enough, but the clunky writing in parts spoiled it for me. Maybe it’s because I usually stick to well tried and tested authors and classics that mean I expect too much.

The blurb on the back says:
Elizabeth Pringle lived all her long life of the Scottish island of Arran. But did anyone really know her? In her will she leaves her beloved house Holmlea, to a stranger – a young mother she’d seen pushing a pram down the road over thirty years ago.

It now falls to Martha, once the baby in that pram, to answer the question, why?

A captivating story of the richness behind so-called ordinary lives and the secrets and threads that hold the women together.

It just wasn’t my cup of tea though.

6 thoughts on “The Legacy of Elizabeth Pringle by Kirsty Wark”