For me winter is jigsaw time, so over the Christmas holidays I completed my first jigsaw of the year. At times I almost gave up on this one as sometimes I sat there for over an hour and only placed a few pieces of the puzzle. It’s the most difficult jigsaw that I’ve ever done. It’s an ArtPiece Puzzle made by Pomegranate. It’s the first one I’ve done by that maker and I have to say that the pieces fit together so tightly that you can actually lift the whole thing up off the table, with no fear of any pieces falling out, it’s a solid sheet. Sadly the colours haven’t come out quite as well as I had hope they would in the photograph below. 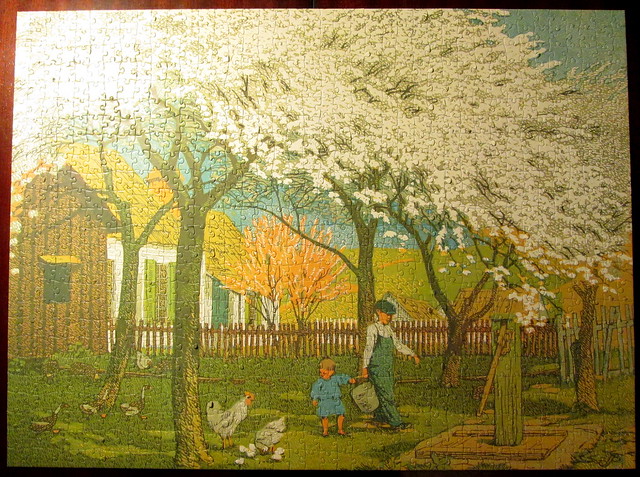 It’s called Plum and Peach Bloom by the American artist Gustave Baumann, although I didn’t realise he was American at first, well look at the name! he was born in Germany and went to America when he was ten years old apparently. When I first saw it I thought it was a puzzle made from something painted by the Swedish artist Carl Larsson, they have quite similar styles I think.

The peach and plum tree blossom just about did me in, but as ever it was really satisfying when I placed the last piece into it.

You can see more images of Gustave Baumann’s work here if you’re interested.

I really like his work, he seems to have been keen on painting woodland areas, and as I love trees, that’s fine by me.

On a completely different subject – we haven’t been anywhere interesting over the last couple of months, mainly because it has hardly stopped raining. But Jack has done a post on Bladon which we visited during the summer. If you want to see what Churchill’s resting place looks like, you can see it here.