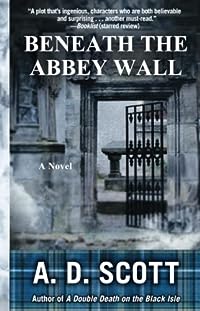 Beneath the Abbey Wall by A.D. Scott is the third in this murder mystery series which is set in Inverness in the 1950s.

Again we’re back at the offices of a local newspaper – The Highland Gazette. Mrs Smart is a mainstay of the organisation and when she is found dead – murdered – the whole place is thrown into confusion. Mrs Smart more or less ran the place, without them really realising it.

Joanne Ross, one of the reporters, is now separated from her abusive husband, it’s a big step for a mother to have thrown her husband out, in a community where women are supposed just to put up with things.

The police are pretty useless and it’s left up to the newspaper staff to investigate Mrs Smart’s murder. During their probing all sorts of secrets come out, in fact nothing is as it seems, not even Joanne who seems so strong and sensible, it now looks like she is going to make the same mistake she did before. There’s no doubt that her brains turn to mush at the sight of a handsome man, no matter how he behaves towards her.

I enjoyed this mystery and the setting. There are quite a few likeable characters, I had an idea who the culprit was but these books are about more than the crime. They’re about how women were viewed in 1950s Scotland and how attitudes began to change, slowly. I’m looking forward to the next book and finding out what happens with McAllister and Joanne.

Although A.D. Scott doesn’t live in Scotland now she is very definitely a Scot and I read this one for the Read Scotland 2016 Challenge.

4 thoughts on “Beneath the Abbey Wall by A.D. Scott”