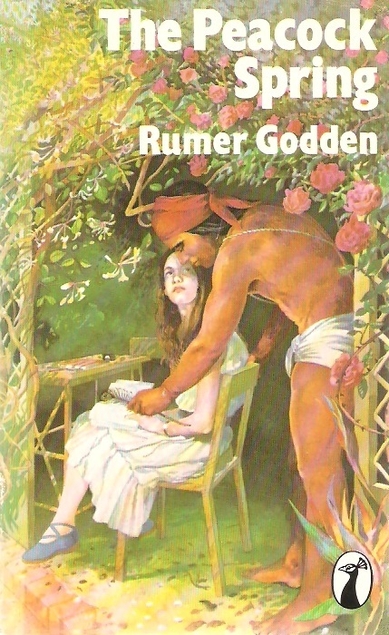 The Peacock Spring by Rumer Godden was first published in 1975 and the setting is mainly post independence India, but it begins in England where 14 year old Una and her 12 year old sister Halcyon are at boarding school as their father is based in India, he’s a diplomat and has custody of the girls after his divorce from Hal’s mother. Una is good at mathematics and is hoping to be able to go to Oxford to study maths there, eventually. So she’s dismayed when her headmistress calls her in to her office and tells her that her father has decided to take them out of school and they are to continue their education in India, with the help of a governess. Halcyon is thrilled by the prospect though, the sisters are opposites in character and Hal lives for pretty things and socialising, she’s a very precocious 12 year old.

As soon as they get to India Una realises that Alix the so-called governess, can’t teach them anything as she knows nothing of maths at all. She is however a very pretty Eurasian, half Indian and half European and as such is despised by the Indians and the British. Except for the girls’ father, who is obviously besotted by her and doesn’t see how manipulative, greedy and bad tempered Alix is.

I’ve always admired Godden’s writing and I really liked this book, although I’m sure it’s aimed at teenage girls as a warning as to what can happen if you get too involved with the opposite sex. Suffice to say that Una discovers that she is quite similar to her father in some ways.

It’s about prejudice, snobbery and class systems with a bit of Indian politics thrown into it and of course as Rumer Godden grew up in India, I’m sure she captured the atmosphere of the place as it was back then.

6 thoughts on “The Peacock Spring by Rumer Godden”