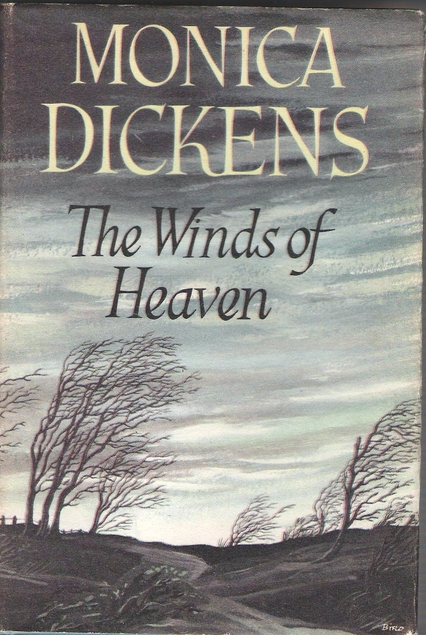 The Winds of Heaven by Monica Dickens was first published in 1955 but I believe that Persephone Books have reprinted it recently.

The year is 1951 and Louise has been recently widowed, she’s 50 something and her marriage wasn’t a happy one as her husband was self-centred and over-bearing, showing her no respect or love. Louise believes that the fact that she gave him three daughters instead of the son he craved made him behave as he did.

Unfortunately it isn’t long before Louise discovers that her husband has left her more or less destitute, he was heavily in debt and the house is mortgaged. This means that she has to rely on her three daughters for everything and although they are all very different characters they are all cold and reluctant to have their mother living with them, so they take turns at housing her for a few months at a time. The daughters have taken their cue from their father.

Louise feels unwanted and burdensome and does everything she can to be almost invisible in her daughters’ homes. On a visit to a London tearoom Louise is befriended by a man who sells beds in a department store. They are both lonely but this relationship seems doomed to fail as they are both rather socially inept.

I enjoyed this book which portrays south of England suburbia and its snobbish inhabitants so well, the pushy parents, social climbing and hypocrisy. The only gripe I really have about it is that Louise’s gentleman friend – who it turns out is a published writer of crime fiction ‘shockers’ as well as a bed salesman – is a good character who didn’t appear often enough in the book for my liking.

4 thoughts on “The Winds of Heaven by Monica Dickens”