We arrived back home in Fife on Saturday night after having been in the Netherlands and Belgium over the past fortnight or so. We had a really enjoyable time although very little went to plan due to the incredibly hot weather that we apparently brought with us! We had driven through hail and snow on the way down to the ferry in Harwich and when we were driving from the Hook of Holland to the north east of the Netherlands we could see rain up ahead of us but never did catch up with it, a lot of the fields were boggy with standing water after days of rain but the next day dawned bright and hot and it turned out that the Netherlands had the hottest weather in Europe while we were there, 29 Celsius / 84.2 Fahrenheit, very hot for May. Strangely the temperature plummeted to 11 Celsius / 51.8 Fahrenheit the day after we left for home, but I feel that I’ve already had more sun than I’ve experienced in many recent British summers. Hurrah!

So we didn’t have a trip to Amsterdam as planned as I couldn’t face being trapped in a hot and bright train to get there, nor did I fancy being in a sweltering city either. The trip to see the tulips at the Keukenhof was kyboshed too for the same reason, but the fields by the sides of the motorways had thousands of tulips flowering away anyway and I managed to get some snaps of them as Jack drove along as you can see. 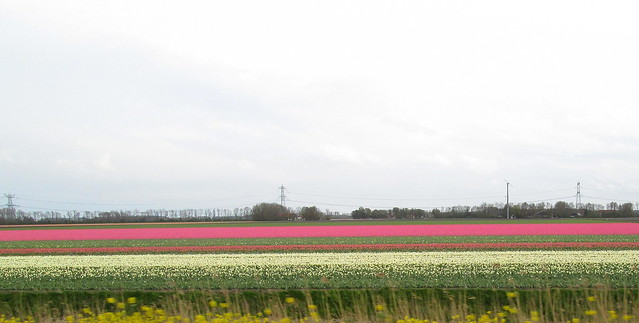 These tulips are being grown commercially, I think they are part of flower trials, but some of them are used to decorate floats in local festivals.

After staying three days with my brother and his wife we travelled to Ypres in Belgium, a four hour drive. It wasn’t quite so hot in Belgium, that was our first trip to that country and one we had been meaning to do for years, mainly to see the Menin Gate. We’ve both had an interest in World War 1 since school history days. Ypres is a lovely city, completely rebuilt in the original style as it was more or less flattened during World War 1. It all looks fairly ancient but the buildings are only around 100 years old.

It seems that Belgium in general is a lot more down at heel than the Netherlands, most of the houses are shabbier as are the roads, but in Holland they do tend to be a bit obsessive about their houses and gardens. Dutch gardens and plantings are gorgeous but the style is very different from a typical British garden which tend to be far less formal and sculpted. Lots of gardens have rows of trees that have been manicured into cube shapes or long rectangles like the ones below in the town square of The Hook of Holland, the ferry port. It’s completely unnatural but very attractive even when the leaves have hardly appeared. 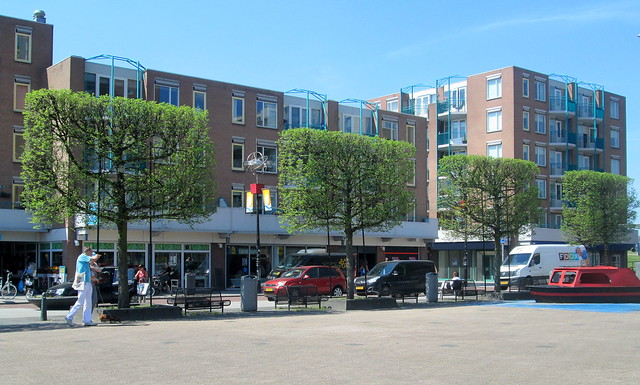 6 thoughts on “Back Home”