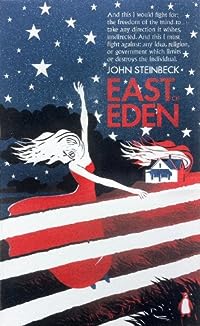 East of Eden by John Steinbeck was first published in 1952 and it was high time that I got around to reading it. I suspect that everybody who is a keen reader already got there long before I did, it’s probably a set book in many schools. I’ve read a lot of Steinbeck’s books and have never been disappointed and sometimes I absolutely love them, East of Eden comes into that category. It’s 714 pages and I read it in three days as I could hardly put it down.

The setting is the Salinas Valley in Northern California and Steinbeck said about East of Eden: “It has everything in it I have been able to learn about my craft or profession in all these years.” He further claimed: “I think everything else I have written has been, in a sense, practice for this.”

I must admit that the title East of Eden didn’t mean anything to me but it is of course from the Bible, Genesis – where Cain was told to go East of Eden after he killed his brother Abel and a version of that story is repeated throughout the book. The main story takes place from the beginning of the 20th century until just after World War 1 but does dip back to the 1880s at times. Mainly it’s about good and evil and how some people are just bad right through to the core whilst others are aware of their weaknesses and fight against their instincts. Many of the characters are from Steinbeck’s own family or neighbours.

As ever Steinbeck’s descriptions of the surroundings and his insight into the human condition, good and evil are a treat to read and I’ve always been slightly puzzled that he apparently didn’t have any Scottish blood in him as those are traits that are particularly prominent in Scottish literature – think Robert Louis Stevenson’s Dr Jekyll and Mr Hyde and many others.

Steinbeck’s maternal family – the Hamiltons – feature in the book and much is made of them coming originally from Ireland and their fierce Presbyterianism, so that solved my problem of how Steinbeck could seem so Scottish – because he was obviously of Scottish descent although somewhere along the way they forgot about going to Ireland from Scotland. Maybe when people migrate more than once it’s easiest to only recall the most recent past. As the Hamiltons were Protestants then it’s likely that they were amongst the Scots who were encouraged by the British government to settle in northern Ireland in an attempt to keep those Roman Catholic Irish people down.

Anyway, all the Scottish elements of writing are in his books, but wherever his talent sprang from he was a great writer and after reading Travels with Charley I came to the conclusion he was a great human being too. If by any unlikely chance you haven’t read any of his books – you should definitely give him a go.

4 thoughts on “East of Eden by John Steinbeck”