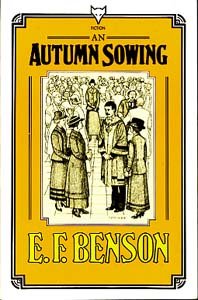 An Autumn Sowing by E.F. Benson was first published in 1917, so three years before his first Lucia book but there are quite a lot of the same elements in An Autumn Sowing. Snobbery and class consciousness figure prominently of course, it’s a good read although if you expect a Lucia type book then you might be disappointed.

Thomas Keeling is very wealthy, he lives in a spacious house in the town of Bracebridge and he is going to be the mayor in the following year. He has made his money through owning a large department store and having a very astute sense of business, but of course it is ‘trade’ so he’s never going to be able to be a member of the County Club where the local aristocrats are, despite being penniless. Mr Keeling is only ever going to be allowed to join the Town Club, fit for people like himself who started out owning just a fish shop.

Thomas Keeling has been disappointed with his marriage and his children, and the one bright spot in his life is his love of books and the fact that he can well afford to have a library of his own, where he indulges in his love of beautiful volumes. Nobody else is allowed into his library, apart from the young man who runs the book department in Keeling’s store. Charles is the closest thing that Thomas has to a friend, not that Thomas would unbend enough to actually have a friend, he’s very much the boss.

When Charles’s sister Norah needs a job she becomes Thomas’s secretary and after a shaky start when she describes Mr Keeling as being a cad a relationship builds up between them through their mutual love of books. Thomas can’t help comparing Norah with his wife and the wife doesn’t come out of it well. He thought that he was marrying above his station when he married the daughter of a P&O captain but in truth she’s a rather vulgar woman in a noveau riche kind of way, filling her home with ghastly folderols, such as a stuffed crocodile which stands on its back legs holding a brass tray – for visiting cards.

This book was never going to have a happy ending but it is really quite funny in that sharp-tongued Benson way and it’s interesting to see so many similarities with the Mapp and Lucia books. There are characters who speak ‘baby talk’, a figurative secret garden, a mayor, royal honours and an extension for the local hospital.

I found it interesting that the secretary was called a typewriter not a typist or secretary and she was expected to bring her own typing machine with her instead of being provided with one. I wonder when they started to be called a typist?

My copy of this book is a 1987 reprint and it’s a shame that it isn’t available on Project Gutenberg as I’m sure that a lot of people would enjoy reading it.

I haven’t read any of Benson’s Dodo books, have you? Would you recommend them?

7 thoughts on “An Autumn Sowing by E.F. Benson”