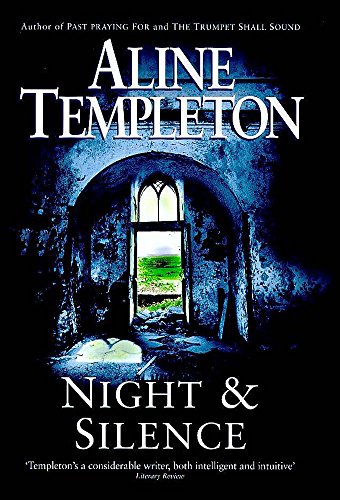 Night and Silence by Aline Templeton was published in 1999 and I know that I requested it from the library after reading about it on a blog – but I can’t remember who recommended it – maybe it was you! Anyway, I hadn’t read anything by Aline Templeton before but I will read more of her books. I suspect though that people in Wales wouldn’t be saying that if they had read this one because the setting is a small town in Wales and she doesn’t have a good thing to say about any of the inhabitants, having said that though she didn’t say anything about them that I hadn’t heard said before.

David Cordiner has been promoted in the police force, the down side of that is that his promotion means a move to a Welsh valley for him and his wife Tessa. She finds the relocation particularly hard as the small-minded gossiping natives are a bunch of bullies and are happy making newcomers miserable. It’s a huge change from her life in London where she was a successful artist.

When the body of a young nurse is found on a hillside suicide is suspected but quickly ruled out. The investigation turns up evidence that she was only interested in money and expensive clothes and jewellery. She’s one of those women who should have dangerous to know stamped across her forehead.

Meanwhile the local pervert is stalking Tessa and nobody is taking her complaint seriously. Her husband is more interested in his new job and is making the same mistakes that he made during his first marriage.

Will Tessa survive it all and will their marriage break up, will they manage to get out of Wales and resume life as they knew it previously?

Unfortunately this is one of her standalone novels so I don’t think the characters ever appear again. Shame.