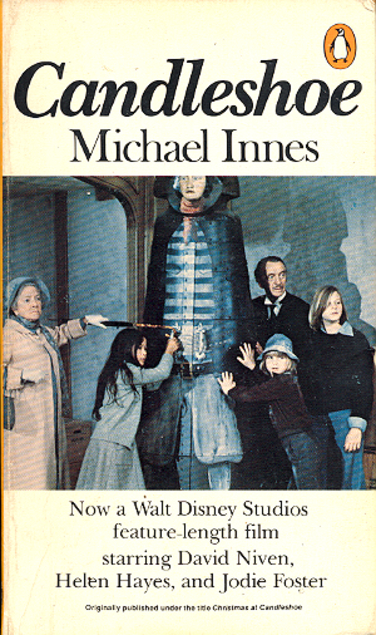 Candleshoe by Michael Innes was a very recent purchase by me. I bought it when I was down in the Scottish Borders a couple of weeks ago. I hadn’t even heard of this book before but Peggy knew about it and she has seen the film that Disney made of it. In fact the book was originally called Christmas at Candleshoe but my copy is a later tie in to the film. The book has nothing to do with Christmas the festival at all, it’s someone’s first name. As you can see from the book cover David Niven starred in the film, I don’t know how I managed to miss seeing it. Possibly it was released during one of the several times that our local fleapit in Dumbarton was closed due to fire damage. The Rialto,the last surviving cinema was forever going on fire for insurance purposes it was rumoured!

It’s a bit confusing as although the film is apparently aimed at kids, being made by Disney, the book definitely wasn’t written for children. Michael Innes had a habit of using the art world as part of the plot in his books – as he does with this one but it bears no resemblance to his Inspector Appleby mysteries.

A very wealthy American woman tourist is in Britain touring the usual country stately homes. As her son is a student at Oxford and she is very keen on all the ancient history of England, she’s on the lookout for an estate to buy and refurbish. When she stumbles across a house that has been completely bypassed by the 20th century she’s enchanted.

Her son fears that she’s determined to buy the ancient pile and Jay a teenager who seems to be keeping the whole place going is also worried that the very elderly owners would be happy to sell up. Jay believes an old story that there is treasure somewhere in the house and he’s not surprised when the house comes under attack from thieves.

The whole thing is a bit crazy and I have to say that this definitely isn’t one of Michael Innes’s best books. He was always very keen to shoehorn literary elements into his books, I suppose because for his day-job he was a university lecturer in English, but I don’t think that mentioning Meredith and numerous other literati does much for the pace of a mystery. He drops in Latin phrases in much the same way as Dorothy L. Sayers did, which is fine if like me you were lucky enough to do Latin at school, but I suspect that it’s just an annoyance for many people. At least he doesn’t switch to Greek as Sayers did at times!

This is my 21st book read for the Read Scotland 2016 Challenge. That level was originally being named ‘Back O’ Beyond’ but since visiting the Isle of Skye recently with Peggy, I think it is now going to be called Skye, or Isle of Skye – it’s up to Peggy. Any levels beyond that being named Orkney and then the ultimate – Shetland.

I think I’ll be giving this one a three on Goodreads.

2 thoughts on “Candleshoe by Michael Innes”