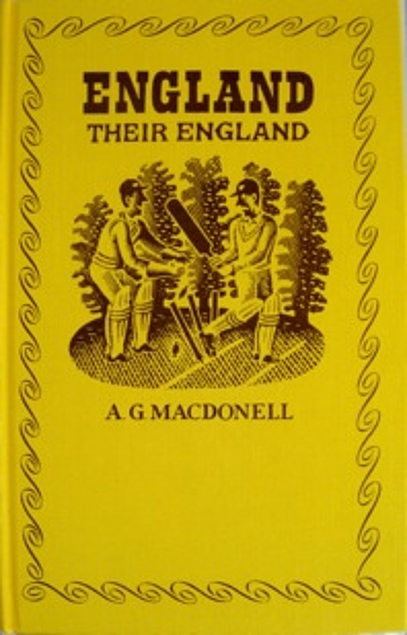 England Their England by A.G. Macdonell was first published in 1933 and it won the James Tait Black prize that year. My copy is a lovely illustrated Folio Society one. The only other book I’ve read by him was a vintage crime and he did write under various names. My copy is illustrated by Peter Brookes.

The book is set in the early 1920s, Donald Cameron is a young Scot who had been invalided out of the army where he was at the Western Front. When he gets home to Aberdeenshire where his father is a farmer it’s evident that he isn’t much use to his father, and his father tells him to go to England. (Harsh!)

While he was at the front he had met up with a Welshman who had been in publishing. On hearing that Cameron was interested in writing he told Cameron to look him up in London if they ever get out of the war, so that is what he does. The Welshman thinks that a book about the English from a foreigner’s point of view would go down well, and Cameron immerses himself in English society of various sorts as a way of studying them.

His account of a cricket match is apparently the most famous and popular part of this book but for me it was his invitation to a country house Friday to Sunday that was the funniest. Donald was taken in hand by a man who knew how to make an entrance at such a social event. The most important thing was to arrive with masses of luggage which would impress the servants and then receive numerous phone calls from various important persons – all made by Donald’s social advisor of course! It was a hoot.

This is all very much tongue in cheek of course. At the time this book was first published there was a bit of a vogue for such amusing books, by people such as P.G. Wodehouse and Jerome K.Jerome.

I read this one for the Classics Club Challenge, Read Scotland 2016 Challenge and the James Tait Black Challenge – three with one book!

2 thoughts on “England Their England by A.G. Macdonell”