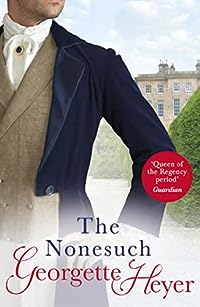 The Nonesuch by Georgette Heyer is one of her Regency romances – a bit of a romp, but perfect holiday reading. It was first published in 1962 and this one has a lot of similarities with Jane Austen, more so than others of Heyer’s books I’ve read.

Sir Waldo Hawkridge is a wealthy, handsome and fashionable bachelor of thirty-five or six. In his younger days he was well known as a great athlete and he’s still held in high esteem by the younger males in society. In fact they are still emulating the somewhat crazy fashions that Hawkridge made popular years before, although he himself is dressing with much less fussiness in his old age. He was given the nickname of The Nonesuch meaning he was a paragon, nothing and no-one could better him.

In fact most people don’t realise quite what a paragon The Nonesuch is. Although he is wealthy he has an interest in orphans and the poor and when he inherits an estate from a miser of an uncle he decides to turn the house into another orphanage, but it’s all very secret as he doesn’t like to advertise his philanthropy.

Throw in three young male relatives and a bit of love interest, just when The Nonesuch thought he was past such things, it all adds up to an amusing and entertaining read.

4 thoughts on “The Nonesuch by Georgette Heyer”