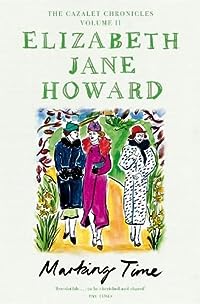 Marking Time by Elizabeth Jane Howard was first published in 1991 and is the second book in the Cazalet Chronicles.

I found this one to be just as enjoyable as The Light Years, the first book in the series, always a bit of a scene setter. The characters are all maturing nicely, inevitable given the things they’re experiencing.

The older members of the family take a bit of a back seat for a lot of this book as the focus is on the younger generation and how they are coping as the war just begins to bite deeper into every aspect of life.

Rupert’s young second wife Zoe is never going to be the same again after her horrific experience in book one, something so shaming she’s never going to tell anyone about it, but the birth of Rupert’s son has given her something to live for while Rupert is thought by everyone to almost certainly be dead.

Villy has been seriously ill but she and her husband Edward are in denial of the whole illness and heartbreakingly as Villy goes into remission and feels so much better she jumps to the conclusion that her health has turned a corner and she is getting back to normal with nothing to worry about. Edward, her otherwise despicable husband can’t bear to tell her the truth. Their whole marriage has been based on secrets with Villy sticking her head in the sand when she doesn’t want to admit things, either that or she’s just too dim for words.

The families’ London houses have all been more or less shut up for the duration of the war as bombs have been raining down on the capital, damaging the woodyards belonging to the Cazalets, so important to the war effort and their income.

There are secrets aplenty, unrequited love, affairs and annoying unfair prejudices against daughters by mothers. It’s just after that time known as ‘the Phoney War’ when life in Britain went on much as before for the first months of it and rationing for clothes and food hadn’t quite taken hold.

Mind you the Cazalets were rich and the rich were/are always cushioned from the daily deprivations that others have to get used to. Such is life and it’s that sort of reality that makes me feel that Howard has captured the atmosphere of wartime south of England. I’m looking forward to the next in the series which I think is called Confusion.

Joan @ Planet Joan read Marking time recently too and you can read her thoughts on it here.