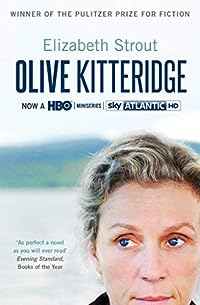 I decided to read Olive Kitteridge by Elizabeth Strout because so many bloggers that I follow seemed to have enjoyed it, and also the setting is Maine in the US which is a setting I’ve enjoyed in the past. But although I ploughed on to the end of this book hoping that it would get better – it didn’t. I found it to be a car crash of a book – a fix up. Apparently it won the Pulitzer Prize for Fiction – the mind boggles!

It’s just as well we are all different I suppose but I couldn’t find anything good to say about it. The front cover says that it is now a HBO miniseries sky ATLANTIC – and I can see why the book would be snapped up for TV as it basically lurches from one bad situation to another. Just the sort of thing that gets people watching soaps.

There were no likeable characters, particularly not Olive Kitteridge who spends her life telling people how awful her mother-in-law was, but when her son marries, Olive is an even worse m-i-l. She’s so much of a power freak that she has designed and built a house for her son to live in when he grew up, close to her house. She has a strangle hold on his life and her husband Henry is a pathetic soul living on dreams, as anybody would who was faced with Olive day in day out.

In parts of the book it wanders off and to me it felt like the author had pulled some unpublished short stories out from under her bed (all writers have them) and shoe-horned them into this book to bulk it out. Then threw the name of Olive Kitteridge into them by way of tying it in.

If you feel the need to wallow in depressing human circumstances then go ahead and read Olive Kitteridge. Given what 2016 has been like, I’m in need of something altogether more entertaining and uplifting – and less like a bad soap in search of ratings.