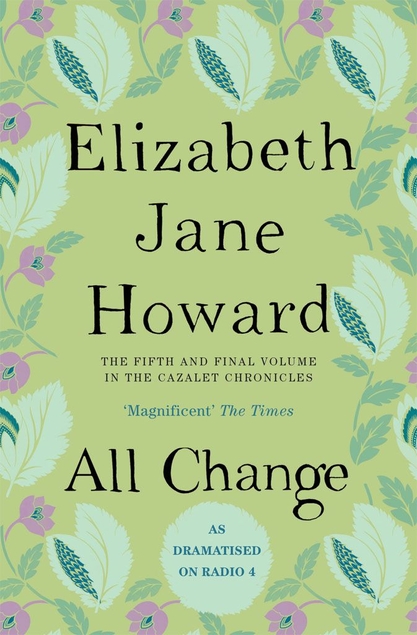 All Change by Elizabeth Jane Howard was published in 2013, it’s the fifth and final book in the Cazalet Chronicles. I didn’t even realise there was a fifth book as there’s a big gap in between the fourth and fifth, I’m so glad that Howard got around to writing this one though as I absolutely loved it and I felt that the fourth book left a lot of strands of the story up in the air.

It’s a chunky book at 576 pages, but I just didn’t want to reach the end of it as I was enjoying being in that Cazalet world so much. Mind you that didn’t stop me from reading almost the whole of Monday, immersed in the family saga. I know that at some point I’ll read these books again and that isn’t something I often do.

All Change begins in June 1956, so that’s nine years after the events of book four. The Duchy’s life is coming to an end, it’s the end of an era as she is the last of the senior Cazalets and her daughter Rachel is of course looking after her, as she has done all of her life.

The wood importing business that has been able to sustain the Cazalets in some luxury over the years, is on a downward slope, mainly because the brothers don’t have the same business savvy that their father had. They’ve led a life of servants and comfort and Edward in particular has always lived beyond his means, with a huge sense of entitlement and a wife who is under the impression that he is a lot richer than he really is.

The younger members of the family are getting on with their own lives and for me everything was tied up very satisfactorily. There were so many things in this book that struck chords with me, such as nursing elderly parents and the death of the last of the older generation, and the breaking up of the family home.

Howard was very good at passing character traits down the generations, so there’s that recognition of someone ‘taking after’ their father or uncle, as there usually is in large families. Often when you’re watching an actor on TV you come to really despise them, if that is what their character calls for and of course we all realise that that is a testament to the actor’s skill and talent. In a similar way I really admire Howard’s ability to write a truly ghastly character – such as Diana who is gobsmackingly self-centred, manipulative and nasty – how I hated her!

Sex rears its ugly head quite a lot of course with several marriages and some affairs on the go, but I noticed that none of the women involved are really interested in it, and one by one the author lets us know that, it’s just something they put up with to get or keep their men. Some of them hide their lack of interest better than others.

I did notice that Howard had made a mistake because she mentions that one of the female characters has her widow’s pension (her first husband – a soldier- had died in the war). But of course when a woman re-married she lost the right to a widow’s pension, that is still the situation today although some people are trying to change it.

In the spirit of taking risks, instead of the usual taking care – I’ve just bought the DVDs of the TV series which I’ve never seen, it might be a mistake to watch it, I could be severely disappointed, but then again, I might love it. I’ll keep you posted!

4 thoughts on “All Change by Elizabeth Jane Howard”