My copy of Miss Ranskill Comes Home by Barbara Euphan Todd is a Persephone reprint and it was first published in 1946. I was surprised to learn that the author wrote lots of children’s books including the Worzel Gummidge books, but under the name Barbara Bowers.

I’ve had a few disappointments with Persephone books but this one was a real page turner, for me anyway.

It begins with Miss Ranskill digging a grave for her companion the Carpenter, they had both separately been washed up on a desert island and for a few years they had been living on fish and sea birds, keeping their fire going and building a boat, hoping to escape the island. Sadly the Carpenter died before they could set sail and it’s left to Miss Ranskill to cast herself off on her own.

Miraculously she is rescued by a British merchant ship, and you would think that her problems would be over, but they’re just beginning. For one thing World War 2 broke out while she was on the island and it has been going on for over three years. Miss Ranskill (Nona) finds herself in a totally alien society, she knows nothing of rationing and coupons, air-raids or black-outs. She’s so out of place at ‘home’ that people assume that she must be a spy working for the Germans.

As Miss Ranskill had fallen overboard from a liner (whilst trying to retrieve a hat she didn’t even like) she has been presumed dead and her will has been proved, everything is so different from what she had expected of her return. Nona’s sister seems hardly bothered by her return from the dead but the family dog is happy to see her. Eventually she does come up with a solution for her predicament, and at the same time helps others whose lives have been turned upside-down by war.

Nona Ranskill is a really likeable character and the book is very entertaining, it’s a real pity that this is the only book for adults that the author wrote. I’m now tempted to seek out he Worzel Gummidge books, I never read any as a child although I watched it on TV. Have you read any of the books?

The endpapers are from a cotton textured fabric which was designed for Helios by Graham Sutherland, and it’s called Sutherland Rose. I had no idea he had designed fabric, but I can’t say I’m all that struck on it. 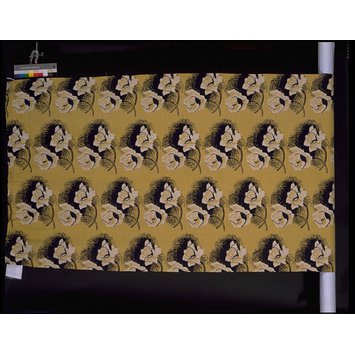