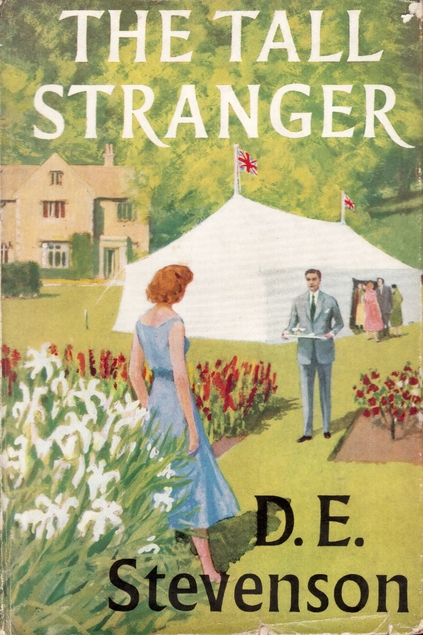 The Tall Stranger by D.E. Stevenson was first published in 1957 and I was lucky enough to find this one in a second-hand bookshop in Kirkwall, Orkney.

I see D.E. Stevenson as being a sort of updated O.Douglas in her writing style and content, although not quite as ‘churchy’.

This one begins in London where the people are having to cope with a horrendous fog that has lingered for almost a week, but thankfully about half-way through the book the action moves to the clear air of the Scottish borders.

Barbie and Nell are great friends and flatmates. In some ways they’re quite different with Nell being happy running around with lots of different boyfriends and cheerfully accepting lots of gifts from them. She works as secretary for a doctor. Barbie is much more choosy about men friends, and at the beginning of the book she’s in hospital, seemingly having lost the will to live.

When she improves enough to be able to travel she goes to Scotland to stay with her Aunt Amalia/Lady Steyne who lives in a lovely old house called Underwoods. There she meets up with her step-cousin, someone she hasn’t seen for years, and at first Barbie is charmed by him.

This was a good read, D.E. Stevenson’s books have the reputation of being light comfort reads, but they also have a serious side. Barbie has a career that she loves and is very good at, she’s an interior decorator and the thought of giving that up to please a husband isn’t a pleasant one for her. Quite a modern concept for 1957 I think.

Also there’s a moment in this book when Barbie realises that she’s not at all happy with her discovery of an unexpected trait in her fiance’s character. It’s a shock and a game changer for her, she’s wise enough to have a complete re-think about her future. I’m sure that this is something that must have happened to a lot of people, and they have looked back and thought – that was the time when I should have taken steps to change things.

Not just a comfort read.