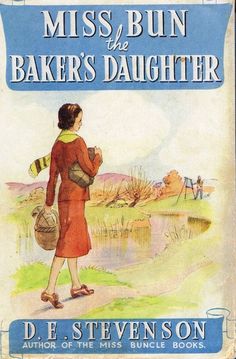 Miss Bun the Baker’s Daughter by D.E. Stevenson was first published in 1939, written in 1938. The author says in a foreword added in 1973: This book was written in 1938 and published soon after, but although many of the facts have proved untrue it is still artistically true of any little town in the Scottish Border Country and the people are as real today as they were thirty-four years ago.

So far this book has been the least satisfying of Stevenson’s for me, in fact slightly annoying at times as it really didn’t ring true to the era, particularly in Scotland. It’s 1938 and we’re supposed to believe that a young girl would be able to live in a house with just her youngish male employer. She would have been the ‘talk of the steamie’, but apart from that her father and grandparents would never have allowed it.

Early on in the book D.E. Stevenson describes what you should do while singing Auld Lang Syne at New Year, but she did it all wrong – something that drives me mad. She said that you should cross your arms to shake hands with the people on either side of you at the beginning. But of course you shouldn’t do that until the last verse (for brevity the second, third and fourth are usually omitted) when the lyrics say – “And there’s a hand my trusty fiere! / and gie’s a hand o’ thine.”

Anyway, to the rest of the book: Sue has been left motherless at an early age and she is left to be brought up by her rather grim and charmless father who is the local baker. She has had to leave school as soon as possible so that she could become her father’s housekeeper, but when her father remarries she’s seen as a nuisance by his new wife, definitely unwanted in the household. When a well known artist living locally and his wealthy wife offer her a job as their housekeeper she jumps at the chance.

However the artist’s wife very quickly takes herself off leaving Sue alone with the artist. His career is taking a bit of a nosedive as he has started to paint in a different style which is not appreciated by the critics.

The setting is the Scottish Borders, probably where the author is at her most comfortable and so that is always pleasing, but her characters left quite a lot to be desired with the maternal grandparents being particularly unlikely, they didn’t come up to scratch as doting grandparents to me anyway.

This is probably me being nitpicking, but I didn’t really like anybody in the book, and that’s always a problem for me.

As 1938 was a year of worry and turmoil for people in Britain with the onset of World War 2 expected at any time, I’ll forgive her this slightly disappointing book.

6 thoughts on “Miss Bun the Baker’s Daughter by D.E. Stevenson”