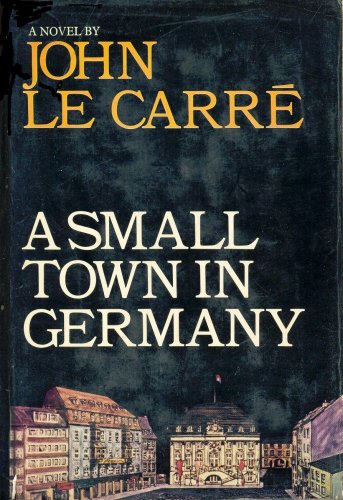 I’m a day late with this post as 1968 Week finished on the fifth of November, but heigh-ho better late than never, I think.

A Small Town in Germany is the first book that I’ve read by John Le Carre and it definitely won’t be the last as it was a great read.

The setting is Bonn in the late 1960s and there are demonstrations in the streets and political strife in general. It’s a time when British politicians were desperate to join the Common Market as the European Union was called back then. General de Gaulle was doing his best to keep the UK out. I remember it well.

Alan Turner has been sent to Bonn from the Foreign Office in London. He has been tasked with looking into the disappearance of Leo Harting who is a minor embassy officer who has been on rolling temporary contracts for the last twenty years. Turner is disliked by everyone because it seems that Harting has been running rings around them all, being all things to all men and women and manipulating his way into having much more access to files than he should have.

Turner discovers that not only is Harting missing but so are dozens and dozens of files, including the all important green file. It seems that Harting must have been working for the Russians for years.

As espionage tales go this is a fairly straightforward one but very well written and enjoyable. It’s somewhat depressing though that almost fifty years on from when this book was published nothing much seems to have changed politically. This passage struck me:

With politics in Bonn being overtaken by a wealthy right-wing industrialist who is successfully building a new political party this seemed spookily prescient, it’s just a matter of changing the country – or maybe such things are just constantly repeating in history as subsequent generations fail to learn from the past. I’ll definitely be reading more Le Carre books. Can anybody recommend the next one I should read?