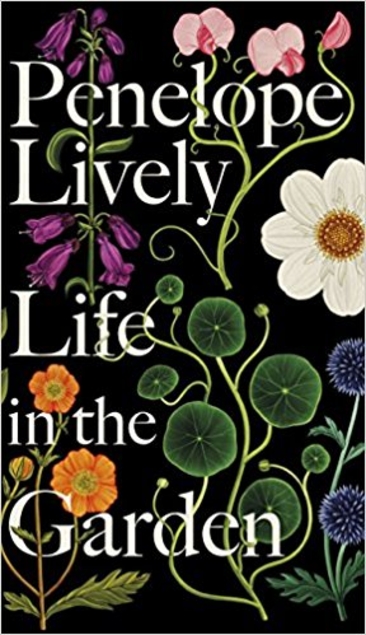 Life in the Garden by Penelope Lively was just published earlier this year and it has also featured on BBC Radio 4 extra, you might still be able to listen to it here if you’re interested.

I loved this book and this time of the year made it a perfect read for me as it has suddenly got too cold to do anything in my garden, reading this was a good way of dealing with my withdrawal symptoms.

Penelope Lively was born into a family of keen women gardeners and from them she inherited the genetic tendency to plan and plant gardens wherever she could. Her first garden experiences were in Egypt where she grew up but eventually her family moved back to England where her grandmother, a very wealthy woman, gardened on a grand scale. It sounds like it must have been a wonderful place but as is often the way with gardens, it no longer exists, having been built on. I think that this is something that all gardeners realise – no matter how much work you put into them, in the end they’re very ephemeral and all it takes is a few seasons of neglect and that garden begins to disappear back into a wild state.

Penelope Lively talks about the various large gardens she has planned in different parts of England before settling in her vintage years in a small London garden. It’s a bit of a memoir of the gardens she has known and the books she has read. This is one of those dangerous books that mentions lots of other books and I found myself noting titles down for future reading, in fact I’ve already purchased one of them, English Flower Garden by W. Robinson, but a lot of the fiction books she mentions because they feature gardens. They’re mainly classics and most readers have probably read them all – Alice in Wonderland, Tom’s Midnight Garden, The Secret Garden. Authors such as Beatrix Potter, Edith Wharton, Virginia Woolf, Vita Sackville-West and lots more.

She talks about the changing fashions in plants, and roses of course feature quite heavily. She mentions that as she’s now 83 she can’t do everything in her garden herself and sometimes has to rely on getting a man in to do some jobs, with some disasters ensuing. She has admiration for gardeners in other parts of the world who aren’t lucky enough to have a climate such as Britain’s as we don’t have to cope with really awful low temperatures.

I really enjoyed this one, I’ll give it 5 stars on Goodreads I think, the only gripe I have about it is that although it’s a hardback and has an attractive cover, it was published by Penguin and has been bound so tightly I found it quite difficult to hold it for any length of time. I was the first person to borrow this one from the library so probably it will ease up eventually, but the actual paper used isn’t very good, I don’t think it will age well. Having said that I will probably buy Life in the Garden at some point as it’ll be great for dipping into during bad weather.

If you haven’t tried Penelope Lively’s fiction you should give her books a go!

8 thoughts on “Life in the Garden by Penelope Lively”