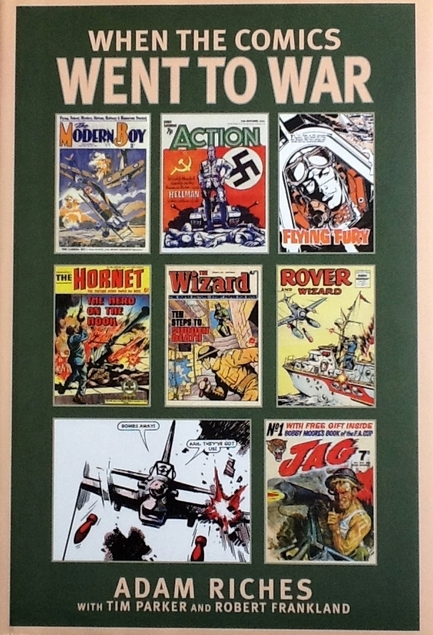 I was only going into the library to return a book and had sworn to myself that I wasn’t going to take any out, but this one was on prominent display and I ended up borrowing it. I must admit that it hadn’t dawned on me that the comics are all ‘boys’ comics. That doesn’t make it any the less interesting but it leaves me wondering what was going on in girls’ comics during the war.

When the Comics Went to War by Adam Riches with Tim Parker and Robert Frankland is full of excerpts from boys’ comics from as far back as Victorian times and up to World War 2. Originally they were known as ‘story papers’ and writers such as Conan Doyle, R.M. Ballantyne, W.G. Grace and Baden Powell contributed. There are great illustrations, it seems that talented artists were well employed in this area.

But there’s also plenty about the social history of the times, so although this is aimed at men who read the many comics, the Rover, Wizard, Lion, Hurricane, The Hotspur, The Champion and no doubt for older readers it’s a nostalgia trip, I still enjoyed it despite the fact that it’s full of testosterone fuelled adventure tales. The book would make a good gift for older men, I’m sure because it’s full of tanks and other wartime accoutrements that they seem to enjoy identifying.

I think the writers of this book were keen not to glorify war though, each chapter is preceded by a quote about war from someone famous.

Albert Camus said: “In such a world of conflict, a world of victims and executioners, it is the job of the thinking people not to be on the side of the executioners.”

And from Bertrand Russell, “war does not determine who is right – only who is left.”

At the beginning there’s a quote from Arthur Koestler: “The most persistent sound which reverberates through men’s history is the beating of war drums.”

Sadly that’s true – if only war could be contained within comics instead of constantly breaking out all over the world.

I’d still love to know particularly how World War 2 impacted on girls’ comics, I suspect though that it might have been girls doing unexciting but necessary things such as knitting for the troops or gathering paper and such for the war effort – if the war was even mentioned at all!