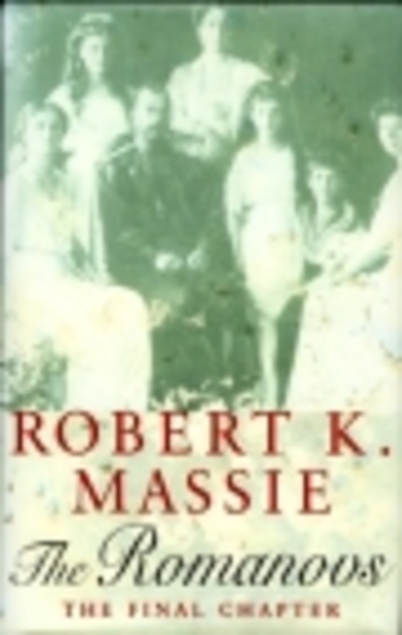 I’ve always been interested in Russian history and years ago I read Nicholas and Alexandra by Robert K.Massie, so when I saw The Romanovs: The Final Chapter by the same author I had to buy it. This book was first published in 1995 which I’m always shocked to realise is over 20 years ago, so some things have moved on a lot from the end of the book.

I have to say that I was a bit disappointed by this book, that’s partly because I remember how much I enjoyed his previous book on the subject. The beginning of this one was interesting as was the end but oh dearie me – the middle section dragged on and on in an exceedingly tedious manner. It was the early days of DNA testing – a new branch of science. When bone remains were discovered and thought to belong to the Russian Imperial family it was hoped that DNA could be extracted from them but that was no easy matter as there were arguments about who could give permission for the tests to go ahead. Another problem was that some so called experts weren’t able to admit that they didn’t have the expertise required and ultimately never did come up with any results. In the end it was Prince Philip who gave blood for comparison with the bone DNA as his mother Princess Alice was Alexandra’s sister and a British laboratory did discover that the bones were those of most of the family, but Anastasia and Alexei’s bones were missing.

As there had always been rumours that Anastasia had survived the massacre in the cellar of the Ipatiev House in Ekaterinburg this obviously set the tabloid types agog. So began a section involving all the stories of imposters who had appeared from time to time since the 1920s, claiming to be Romanovs. Anna Anderson is I’m sure the best known of those demented/fraudulent people and it’s amazing to think that for almost 60 years she duped a lot of people who really should have known better. I suppose some people just longed for there to be a survivor and disregarded the evidence. One Polish man (it turns out that ‘Anna Anderson’ was Polish too) claimed to be Alexei despite being 18 years too young, born actually in 1922 and crucially NOT a haemophiliac!

It wasn’t only the immediate members of the royal family that were murdered, the Bolsheviks had made a fairly good job of eliminating a lot of the extended family. But several different branches of Romanovs did manage to escape murder, mainly those who had already been banished from Russia by the Tsar or had been sent to very remote parts of the country and so had been able to make their way to other bordering countries and safety. The prince who murdered Rasputin had been banished for his deed and that ended up saving his life!

Those surviving Romanovs seem to have spent their lives squabbling with each other over exactly who is the head of the family and deemed to be the new Tsar. Which says it all about the Romanovs really. With the ‘glasnost’ of the 1980s some of them seem to have been very hopeful of being invited back to Russia to take up the throne again. Crazy.

Money and power are two things that often cause mayhem, and the belief that Nicholas had sent millions of pounds to banks in Europe before World War 1 meant that the survivors all wanted to get their hands on it. Well most of them, but a few have lived quiet and useful lives, changed their names and told nobody about their family links with royalty.

It seems that many of the Romanovs despised England for not granting the royal family permission to settle in England and I know that for years I blamed King George V and Queen Mary, but if I’m recalling correctly it was just last year when the private papers were released, and it turned out that it was the British Prime Minister who refused to give permission – and that of course shows the big difference between the Russian Royals and the British ones who really have no power. If Nicholas had been willing to go down the same route then things would have been very different.

The last part of book deals with the Ipatiev House, it had been demolished in 1977 so that it wouldn’t be a focus for Romanov supporters. The authorities in Ekaterinburg hoped to build a church on the site and bury the royal remains in it. But other parts of Russia hoped to get their hands on the bones. With Russia beginning to open up to the world, tourism was in their minds. Nothing had been decided by the end of the book but of course since then a church has indeed been built there and the remains have been buried at the altar which is situated where the cellar was. The victims have all been made saints and the church is called Church on the Blood.

6 thoughts on “The Romanovs: The Final Chapter by Robert K. Massie”